The suspects were trying to sell the car when they were arrested at the Molak area of Ikire. 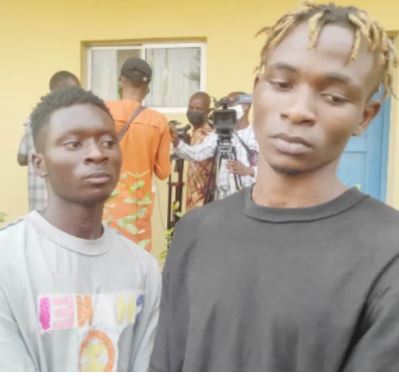 Operatives of the Osun State Police Command have arrested two men for allegedly stealing their employer's car worth 15 million.

Chinedu Dioha and Joseph Emmanuel were paraded before newsmen. While being paraded, the men said they stole the vehicle from their employer in Lagos and took it to Osun to sell.

The Commissioner of Police in the state, CP Wale Olokode said the Mercedes Benz ML 350 with registration number LAGOS FST 707 GN was recovered from the suspects.

The police chief said the suspects were trying to sell the car when they were arrested at the Molak area of Ikire.

The CP said: "Upon a distress call received from Lagos State that a Mercedes Benz car was stolen from a company located in Lagos State, the Osun State Police Command quickly strategised and during a stop and search, the suspects were arrested with the stolen vehicle at Molak area, Ikire while looking for a buyer. The suspects confessed to have stolen the car from the company where they work as staff."

CP Olokode said the suspects would be charged to court after the completion of investigations.