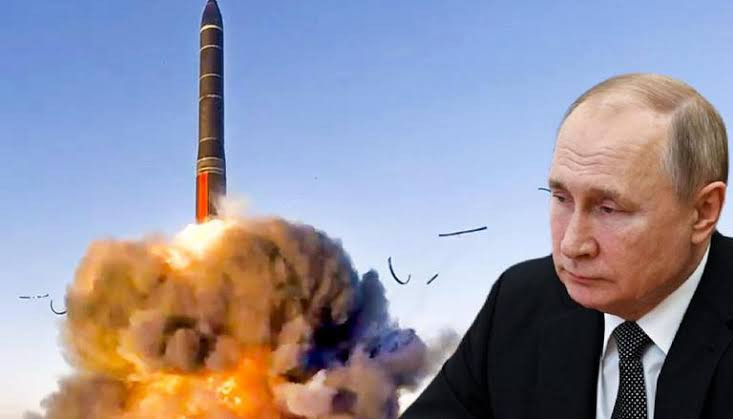 Russian president, Vladimir Putin's decision to put nuclear weapons on high alert has gotten the attention of the United States of America.
Recall that Russia is currently wagging war against Ukraine after invading the country on Thursday.
White House press secretary Jen Psaki said Sunday, February 27, that Russian President Vladimir Putin's decision to put Russia's deterrence forces, which includes nuclear arms, on high alert are part of a wider pattern of unprovoked escalation and "manufactured threats" from the Kremlin.
"Top officials in leading NATO countries have allowed themselves to make aggressive comments about our country, therefore I hereby order the Minister of Defense and the chief of the General Staff to place the Russian Army Deterrence Force on combat alert," Putin said in a televised meeting with top Russian defense officials.
To which the Minister of Defence replied 'Yes sir'.
Putin also said the Western sanctions placed on Russia were unlawful.
This comes as Russian forces record high casualties and face stiff resistance from the Ukranian army who have been joined by civilians to defend their land.
Putin's nuclear weapons threat comes in the face of universal condemnation from Western powers over Moscow's unprovoked assault on Ukraine, now in its fourth day.
"This is really a pattern that we've seen from President Putin through the course of this conflict, which is manufacturing threats that don't exist in order to justify further aggression -- and the global community and the American people should look at it through that prism," Psaki told ABC's George Stephanopoulos on "This Week."
"At every step of this conflict Putin has manufactured threats to justify more aggressive actions -- he was never under threat from Ukraine or from NATO, which is a defensive alliance that will not fight in Ukraine," the official said.
"The only reason his forces face a threat today is because they invaded a sovereign country, and one without nuclear weapons. This is yet another escalatory and totally unnecessary step," they added.
NATO Secretary General Jens Stoltenberg called Putin's allegations against NATO "dangerous rhetoric," adding that "this is a behavior which is irresponsible."
"The new statements from President Putin just added to the very aggressive rhetoric we have seen from Russia for many months, and especially the last couple of weeks, where they are not only threatening Ukraine, but also threatening NATO allied countries," Stoltenberg told CNN's Dana Bash
Top Stories