Some of the exhibits tendered by Mr Usman, an investigator at the anti-kidnapping squad in Kano Police Command, include four mobile phones, cardigan, white hijab, school badge, shovel, victim’s picture and the sum of N30,300 cash. 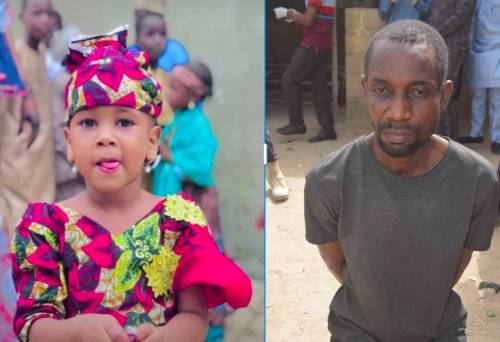 No less than ten exhibits have been tendered by a prosecution witness, Ubale Usman, before a Kano High Court in a case of the alleged murder of 5-year-old Hanifa Abubakar.

Some of the exhibits tendered by Mr Usman, an investigator at the anti-kidnapping squad in Kano Police Command, include four mobile phones, cardigan, white hijab, school badge, shovel, victim’s picture and the sum of N30,300 cash.

Abdulmalik Tanko, alongside Hashimu Isyaku and Fatima Musa have been charged with five counts of criminal conspiracy, attempt to kidnap, abetment/kidnapping and concealing dead body, which contravene section 97, 95 and 273,274(b) and 277 of the Penal Code Laws of Kano State 1991.

However, on Wednesday at the resumed hearing of the case, the prosecuting counsel, Attorney General of Kano State, Musa Lawan, presented three witnesses before the court, in which Mr Usman was among them as Prosecution Witness, PW3.

On December 4, 2021 Mr Usman testified that a case of missing person was reported to the police by the father of the deceased girl, Abubakar Abdulsalam of ‘Yan Kaba Quarters.

He asserted that the Department of State Services (DSS), police and medical team immediately moved to the scene, located at Tudun Murtala along Kwanar Yan Gana where Hanifa’s remains were exhumed.

“On January 20, operatives of DSS informed the police that Tanko was arrested for kidnapping Hanifa,” he said.

“The body was exhumed by medical team and evacuated to Abdullahi Wase Specialist Hospital Kano for medical examination after which the corpse was handed to the deceased person's father for burial,” he told the court.

The PW3 also told the court that he personally interviewed Mr Tanko, who told him that he kidnapped Hanifa on December 4, 2021, at about 5:30 p.m, after closing from Islamiyya school.

“Mr Tanko took the victim and boarded a tricycle, later took her to his house situated at Tudun Murtala Quarters Kano.

“Tanko told his wife Hanifa is one of his staff member's daughter that travelled to Abuja for job interview,” he said.

Mr Usman further testified that on December 10 at about 11:00 p.m, Mr Tanko took the girl away from his house and on their way, he put rat poison in tea and gave her to drink.

“On December 11, 2021, Tanko ordered the second defendant to dig a shallow grave, put Hanifa’s corpse in a sack and buried her at the premises of Northwest Preparatory School, situated at Kwanar Yan Ghana,” narrated the PW3.

The defence counsel, Mukhtar Labaran-Usman, cross-examined the PW3 and asked him who was the mastermind of the crime and how he knew the cardigan, hijab and school badge belonged to the late Hanifa.

In his ruling, Justice Usman Na’abba ordered the remand of the accused in prison and adjourned the matter till March 3 for continuation of the hearing.

Speaking after the court sitting, the Attorney General told journalists that they presented three witnesses before the court.

“Two out of the witnesses were DSS operatives who testified before the court in camera for security reasons on how they conducted their investigation in the case," the Auditor General said.