Osondu Igwilo's arrest was made public by EFCC's head of media and Publicity, Wilson Uwujaren 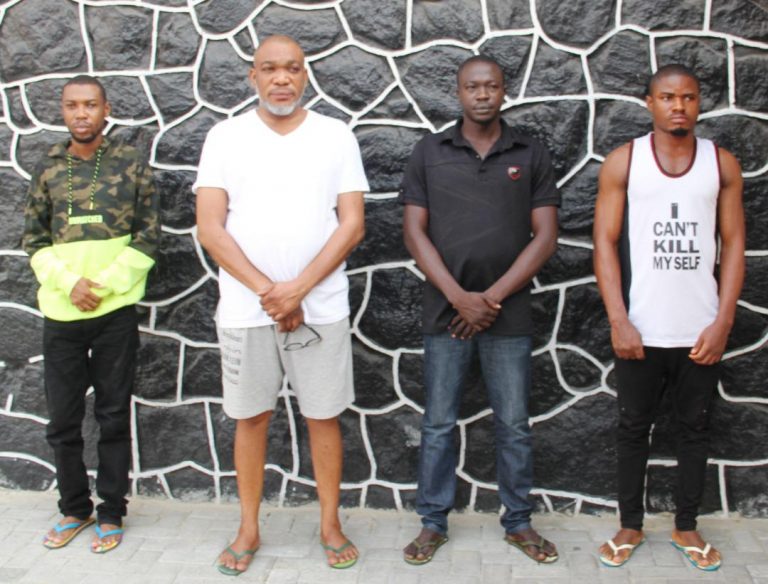 The suspect second from left paraded alongside other alleged criminals
The Economic and Financial Crimes Commission, EFCC has arrested a wanted fraudster on FBI list since 2018.
Osondu Igwilo's arrest was made public by EFCC's head of media and Publicity, Wilson Uwujaren.
He wrote:
“It was the end of road, on Thursday, March 11, 2022 for one Osondu Victor Igwilo, who had been on the watch list of the Federal Bureau of Investigation, FBI, since 2018, when operatives of the Economic and Financial Crimes Commission, EFCC, Lagos Command, swooped on him.”
“Fifty-two year-old Igwilo, who is the alleged leader of a criminal network of “catchers’’ was arrested alongside Okafor Nnamdi Chris, Nwodu Uchenna Emmaunel and John Anazo Achukwu at a studio in the Sangotedo area of Lagos for an alleged fraud, money laundering and identity theft to the tune of about $100m.”
“Before their arrest, Igwilo and his accomplices had allegedly been involved in an advance-fee scheme that involved false promises of investment funding by individuals who impersonated some United States of America, USA, bank officials in person and via the internet.”
“Investigation revealed that those who fell victims of the suspects’ criminal activities were asked to make certain payments before they could receive their funding. It was also revealed that proceeds of the scheme were allegedly laundered through U.S. bank accounts and diverted back to the alleged perpetrators in Nigeria.”
“Consequently, Igwilo was placed on the FBI watch list, following a criminal complaint filed against him in the United States District Court, Houston, Texas in December 2016.”
Top Stories