Nigerian Lady Narrates How She Was Almost Abducted In Ikeja


She was able to escape after seeing a traffic light and hitting the door continuously. 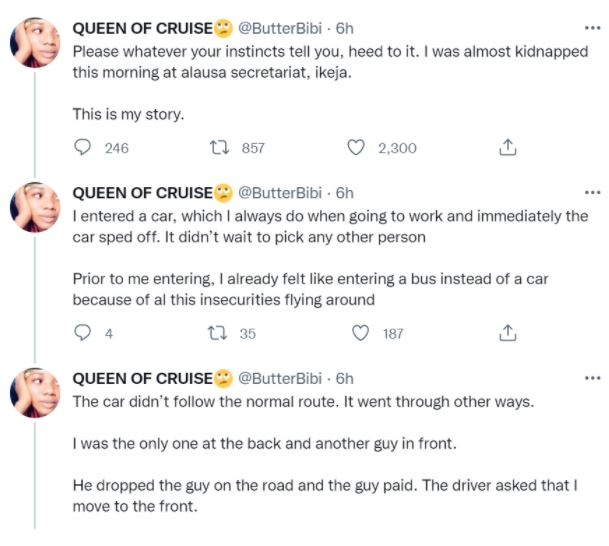 A Nigerian lady took to Twitter to narrate how she was almost abducted in Ikeja, capital of Lagos state.

@Butterbibi said this occurred shortly after boarding a taxi. She revealed that the driver drove off and took a different route with just her and another guy in the car.

The Twitter user disclosed that after the driver dropped the guy off and went back to carry him with an excuse of him paying him with a dollar, she started feeling lightheaded. She added that when she asked them to drop her, they placed the car on central lock.

She was able to escape after seeing a traffic light and hitting the door continuously. The Twitter user wrote;

''Please whatever your instincts tell you, heed to it. I was almost kidnapped this morning at alausa secretariat, ikeja. This is my story.

I entered a car, which I always do when going to work and immediately the car sped off. It didn’t wait to pick any other person Prior to me entering, I already felt like entering a bus instead of a car because of al this insecurities flying around

The car didn’t follow the normal route. It went through other ways. I was the only one at the back and another guy in front. He dropped the guy on the road and the guy paid. The driver asked that I move to the front. So I did. Only for him to move forward and then..

Stop again. I asked why he stopped Then he brought out dollar and said the other passenger gave him the money I was like call him and return it, must be a mistake. He moved forward to speak to the man that dropped The man was speaking a language I don’t understand

He gave him another foreign money. I was conscious but was feeling lightheaded. Then the guy entered once again. The driver started talking a helping him to change money and all. I told them to drop me and they put the door on central lock. I began texting and calling

Immediately I saw a traffic light, I began hitting the door and they opened the door. That was how I escaped. Y’all be safe out there. I’m still shaking.

Some of my stuffs are still inside their car but I’m safe guys Lagos will not be the end of me by God’s grace.''