The suspects while confessing to committing the offence, disclosed that they removed exhibits worth N1.2 million from an MTN communication mast. 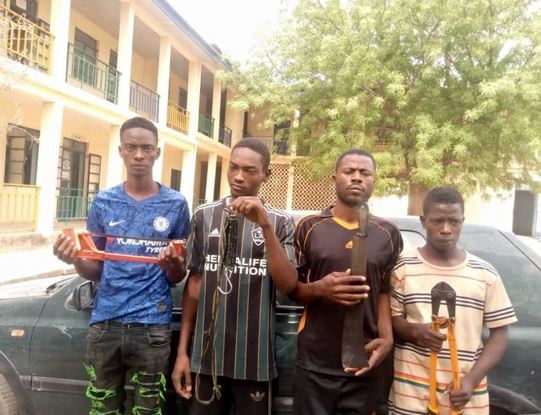 Four suspected vandals of telecommunication network mast have been arrested by operatives of the Katsina police command.

The suspects were also accused of stealing three motorcycles in Nigeria and Niger Republic in the past.

The Police spokesman in the state, SP Gambo Isah, disclosed this on Thursday while briefing journalists on the recent operations of the command.

SP Gambo said, “nemesis caught up with the hoodlums when a team of police operatives on stop and search duty along Daura-Katsina road intercepted the suspects inside a green golf saloon and upon instant search recovered the following exhibits: 8 batteries, hack saw, industrial pliers, a cutlass and knives as well as the golf saloon used for conveying the syndicate.”

The suspects while confessing to committing the offence, disclosed that they removed the said exhibits worth N1.2 million from an MTN communication mast.

The identity of the suspects as provided by SP Gambo are Salisu Abubakar 20, Jamilu Abubakar 27, of Unguwar Waliyi, Jibia LGA, Najib Salisu 20, and Salisu Badamasi 27.

In a related development, the Katsina Police Command also arrested another suspected vandal who doubles as a shop breaker and a thief.

According to SP Gambo, nemesis caught up with 23 years old Abubakar Sa’adu of Unguwar Alkali Quarters in Batsari LGA of Katsina State when police operatives arrested him while attempting to vandalize and cart away armoured cable wire from a mast located at Unguwar Dutsinma.

In the course of the investigation, the suspect confessed to having conspired with one ‘Soja’ currently at large in carrying out the nefarious act. He further confessed to have carried out a series of other crimes bothering on theft and vandalization across the community, SP Gambo said.