Aisha made the plea on her verified Facebook page when she posted the hashtag, “#prayfornigeria” alongside an expressionless photo of herself. 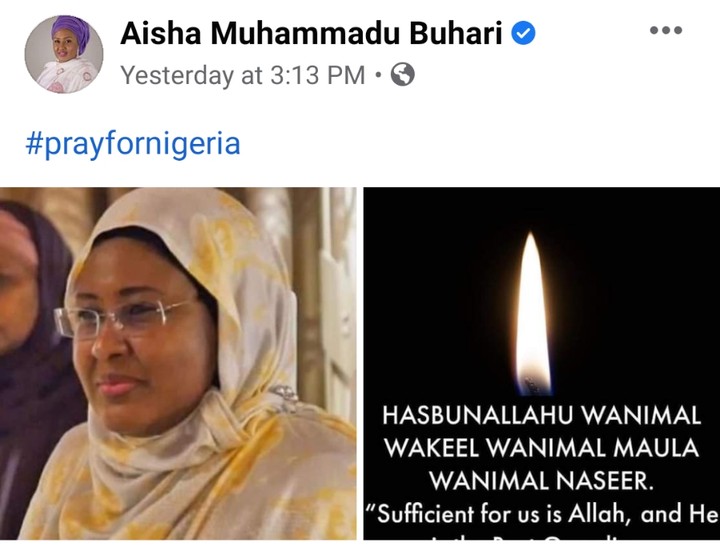 Aisha, wife of the President Muhammadu Buhari has taken to her social media page to beg Nigerians to pray for the country.
Aisha made the call hours after the 2022 Convention of the All Progressives Congress at the Eagles Square on Sunday.
She asked Nigerians to pray for the country.
Aisha made the plea on her verified Facebook page when she posted the hashtag, “#prayfornigeria” alongside an expressionless photo of herself as well as an image of candlelight on a dark background suggestive of mourning mood.
Beneath the candlelight was emblazoned the caption, ‘Sufficient for us is Allah, and He is the Best Guardian. The Excellent Protector and the Excellent Helper’.
Aisha, who is reportedly a mother of five children, was away in Dubai for about six months till March 2021 when she returned to the country.
Until recently, she had been vocal in her criticism of the regime of her husband.
In April 2021, Ekiti State Governor and Chairman of the Nigeria Governors’ Forum, Kayode Fayemi, described Aisha as the voice of the voiceless.
He had said though the First Lady’s “candour may appear in a manner of indiscretion”, the governors were proud to be associated with her as the defender of the defenceless.
Aisha’s comment on Sunday followed the ratification of the preferred candidate of her husband for the position of the national chairman of the ruling party, Abdullahi Adamu.
The ratification of Adamu, a former member of the Peoples Democratic Party, and other members of the incoming APC National Working Committee and Zonal Leaders of the party was part of activities at the convention of the party, which commenced on Saturday and ended in the early hours of Sunday at the Eagles Square, Abuja.
Many critics including the PDP have faulted the emergence of Adamu whom they claimed had been arraigned in court on 149 counts of alleged fraudulent award of contracts and stealing of public funds estimated at N15bn.
Top Stories