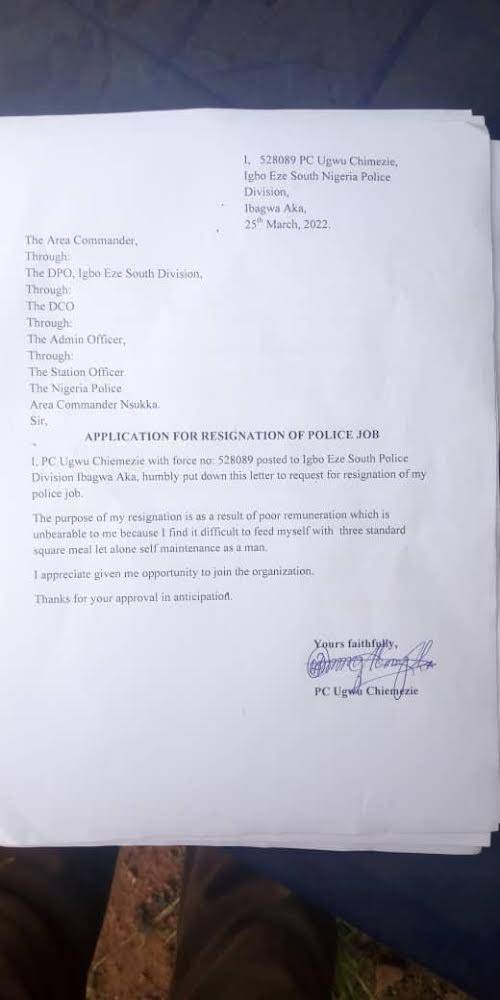 A Nigerian constable has resigned from his position.
The officer identified as Ugwu Chiemezie tendered his resignation over his inability to feed himself and also take care of other basic needs, according to Sahara Reporters.
The police constable serving at Igbo Eze South Police Station, Ibagwa Aka, Nsukka, Enugu State, in a letter to the area commander and other relevant police authorities, said he was quitting the Nigeria Police Force as a result of hardship occasioned by poor remuneration, welfare and general working conditions.
The letter dated March 25, 2022, reads, "I, PC Ugwu Chiemezie with force 528089 posted to Igbo Eze South Police Station, Ibagwa Aka, humbly put down this letter to request for resignation of my police job.
"The purpose of my resignation is as a result of poor remuneration which is unbearable to me because I find it hard to feed myself with three standard meals let alone self maintenance as a man.
"I appreciate being given the opportunity to join the organisation. Thanks for your approval in anticipation."
The poor remuneration, working and living conditions of policemen across Nigeria have been a subject of debate in recent times.
Earlier policemen threatened to protest and embark on strike action over their poor remuneration on March 26.
In an open letter addressed to the Inspector-General of Police, the aggrieved policemen stated that they would not accept any pay rise below N100,000 monthly.
The rank and file said that they were being treated like slaves even when they protected other people’s lives at their own risk.
The strike, which they said was long overdue, became an option, according to them, due to the “lackadaisical attitude of the police authorities in representing us before the Nigerian Government”.
Though the strike action did not go ahead as planned, discontent among police personnel over the issues raised remains rife despite denial by the authorities.
Top Stories