The driver of the Sienna minibus was on the CMS/Obalende route when the incident happened around 11am. 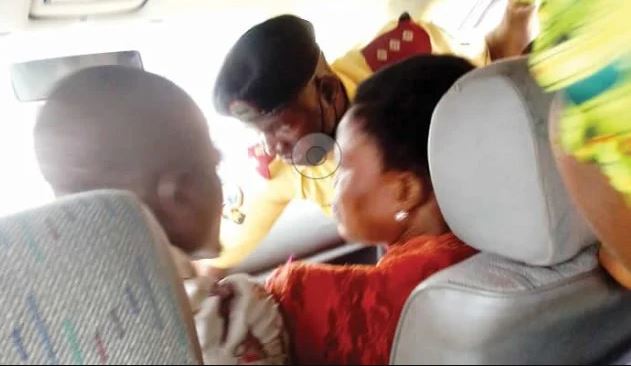 According to a report by The PUNCH, there was pandemonium at the CMS Bus-Stop, Lagos Island, on Friday, when an official of the Lagos State Traffic Management Authority, later identified as N. Bolarinwa, dragged the steering with a commercial driver, who was in motion.

The driver of the Sienna minibus was on the CMS/Obalende route when the incident happened around 11am.

The PUNCH correspondent, who was on the bus, observed that Bolarinwa entered the seat beside the driver and dragged the wheel while trying to force the vehicle to a halt.

The action resulted in confusion as passengers, who were afraid for their lives, shouted for help.

This reporter, who filmed the encounter, captured the moment the passengers panicked.

PUNCH Metro noted that the minibus driver was slowing down to park for the traffic worker and his colleagues when the incident happened.

One of the passengers, who identified herself as Tonbra, said, “We were on the road to CMS when we met several LASTMA officers. Those ones did not stop the driver because he kept to traffic rules and used his seatbelt.

“I was on the front seat with another passenger who used her seatbelt as well. On reaching this point, a LASTMA officer stopped our vehicle and the driver demanded the reason. This was when Bolarinwa opened the passenger door and charged toward the driver.

“The driver asked what he did and the officer mentioned seatbelt. When he checked, everybody was using their seatbelts. The officer didn’t know what to say and started dragging the steering with him. I shouted that he was pressing me and also putting my life in danger by dragging the steering wheel. He said the driver must stop. When the driver stopped, I confronted him for pressing me after I told him I wasn’t feeling well. He said my life meant nothing to him.”

A LASTMA official, Sasi O., who saw The PUNCH correspondent interviewing the passengers and filming the incident, attempted to seize the reporter’s smartphone.

As our correspondent protested, the officer manhandled him and the device fell.

After the reporter identified himself as a PUNCHman, he sobered up.

“The only thing we go for will be the gear or the car key. We don’t touch the steering,” he added.

He also noted that the driver committed an offence by not painting the minibus to identify as a commercial vehicle.

The LASTMA spokesman, Olumide Filade, who confirmed the incident, said the driver violated the state traffic law by not painting and registering the minibus for commercial purposes.

He said, “When an enforcement officer accosts a law violator, the offender should comply with the officers. His arguing or struggling is an offence of disobeying a traffic official while on duty. The officers have not overstepped their terms of engagement with the offender.”

A Lagos-based lawyer, Festus Ogun, said LASTMA officers needed to improve on their modes of engagement.

“Recklessly violating human rights and exposing passengers to danger under the pretext of enforcing traffic laws are completely unacceptable. Hopefully, they will be better trained in professional engagement,” he added.