Following the controversy that trailed the tweet, Adejobi stated that he was misquoted and media platforms made it look like he was endorsing violence by uniformed officers against members of the public. 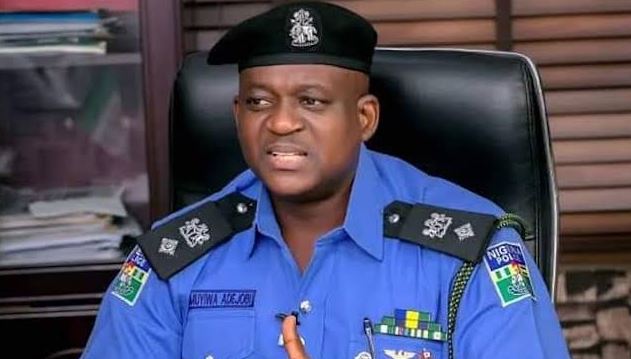 The spokesperson of the Nigerian Police Force, Olumuyiwa Adejobi has reacted to the backlash he received over his comment about civilians not reacting when they are assaulted by police officials.

Adejobi who was reacting to a viral video of  two men wrestling with an armed officer, had tweeted;

“Even if a policeman on uniform slaps a civilian, the civilian has no right to retaliate.

“More so, if he’s on uniform, it’s an act of disrespect to Nigeria to beat an officer on uniform. The disrespect is not to the policeman but to our nation and it’s a crime as enshrined in our criminal laws.

“So it’s not a case of what the policeman did that led to it, but the reaction of the civilians who actually assaulted the police. If police assault a civilian, you report and actions will be taken to rebuke him, not to take the law into your hands.”

Following the controversy that trailed the tweet, Adejobi stated that he was misquoted and media platforms made it look like he was "endorsing violence by uniformed officers against members of the public."

''It has become pertinent to emphasize that the Nigeria Police Force has been a vanguard of sustainable democracy in the country via the aggressive protection of the fundamental rights of the citizens and other members of the Nigerian society. This has been evidential in the continuous sanctions meted out by the Police authority on officers engaged in violation of individual rights, as well as extant laws when reported via any of the available police complaint channels.

The Force Public Relations Officer reacted to a trending video where some individuals grievously assaulting a police officer, and attempting to disarm the officer by dragging his loaded AK47 rifle, restated the law on serious assault as enshrined on Section 356 (2) of the Criminal Code Act of Southern Nigeria with explanations. However, some media platforms deliberately misquoted it as endorsing violence by uniformed officers against members of the public.

Where a public officer acts contrary to the provisions of extant laws, there are channels to report such conduct and get prompt justice, particularly in the Nigeria Police Force.

In the extant case, the individuals resorted to self-help and assaulted the officers, attempted to snatch the officers’ firearm, and in so doing breached the law. It is trite that two wrongs cannot make a right, as such whatever the provocation, the action of the individuals were wrong in all ramifications as they would have reported the matter for prompt action.

Emphasis on this has clearly been misrepresented across media platforms as a single tweet in a thread was mischievously read out of context with a mischievous caption "No Nigerian Has the Right to Retaliate when Police Slaps You... ".

The Force urges well-meaning members of the public all of whom are strategic stakeholders in policing across the country to disregard the malicious publications as the current police administration is committed to ensuring that the rights of all citizens, uniformed or not, is protected across board.

Furthermore, the Force urges the Nigerian populace not to take laws into their hands whenever they have unpleasant encounters with police officers. Complaints arising from such encounters can be reported via the Police Public Relations Officers (PPROs) of the various Commands, the Complaint Response Unit (CRU) and via official Police accounts across social media platforms. Similarly, the idea of pouncing on and beating up Law Enforcement Agents carrying out their public duty by members of the public whom they serve, is criminal and disrespectful to our beloved nation, Nigeria, and must not be allowed to exacerbate.