The group said Malami’s activities are gravely pushing Nigeria into a regional and international abyss of mockery. 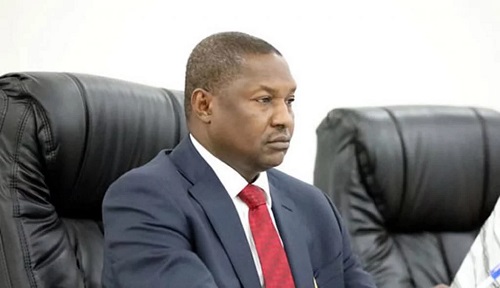 Nigeria's Attorney General of the Federation and Minister of Justice, Abubakar Malami has been called out following a court of Appeal order releasing Nnamdi Kanu, leader of the Indigenous People of Biafra.
A rights group, the International Society for Civil Liberties and the Rule of Law (Intersociety) said Malami must obey the order of the Court of Appeal.
The group said Malami’s activities are gravely pushing Nigeria into a regional and international abyss of mockery, which it said has far-reaching consequences on the country’s socio-economic development, regional and international human rights, the rule of law, and democracy ratings.
Kanu was on Thursday discharged and acquitted by the Court of Appeal in Abuja, but a release from the office of the attorney general insisted that Kanu was only discharged but not acquitted, as several other charges were awaiting him.
But Intersociety, in a press statement by the board of trustees chairman, Mr Emeka Umeagbalasi, said: “Intersociety hereby strongly condemns Nigerian Government’s total disregard and disobedience to the landmark judgment of the Abuja Division of the Court of Appeal quashing the entire criminal trial of Mazi Nnamdi Kanu.
“It must be clearly and strongly stated that the only option available to Nigeria’s Attorney General as the Law Officer of Nigeria is to fully consent to the landmark judgment or go on an appeal within the stipulated timeframe.
“Should the Nigerian Government decide to head to the Supreme Court in the exercise of its right under the country’s body of laws, then Nnamdi Kanu must first of all be set free-with the worst case scenario being to place him in a civil liberties-compliant movement surveillance.
“The Nigerian Government’s disregard and disobedience to the unanimous verdict of the three Justices of the Court of Appeal was expressly contained in a press release from the Office of Attorney General of the Federation,” it said.
The group said the Attorney General’s decision to arrogate the power of interpretation to himself was unacceptable.
“Choosing what to obey and what not to obey in the landmark judgment is also tyrannical, vexatious, and democratically calamitous.
“Consenting or not consenting to the landmark judgment is, however, immaterial to the order of the three Justices-led Court of Appeal: Release Nnamdi Kanu from protracted DSS dungeon,” it concluded.
Top Stories