In a statement released on Sunday, October 16, Ihedioha said he had no link to the letter or audio in circulation. 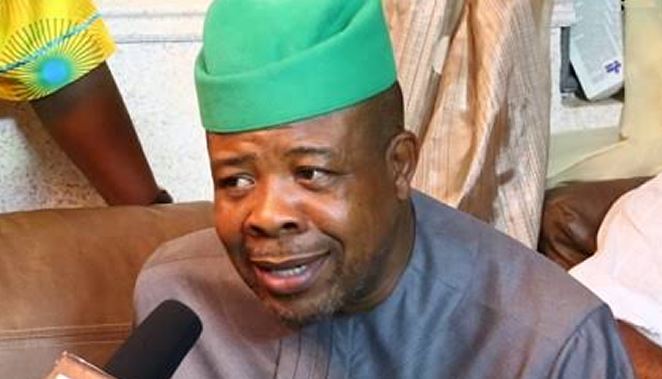 A former Imo state governor, Emeka Ihedioha has rubbished reports that he wrote a letter to the Minister of Justice and Attorney General of the Federation, Abubakar Malami, asking him not to release Mazi Nnamdi Kanu, the leader of the Indigenous People of Biafra (IPOB).

Recall that last week, the Court of Appeal dismissed the charges the Federal government filed against Kanu and asked for him to be released.

On October 16, a letter in the former governor’s name which was addressed to the AGF, surfaced on social media. In the letter, Ihedioha allegedly urged the AGF not to release Kanu to ensure stability and peace in the southeast. Also a recording was in circulation wherein a voice that was claimed to be Ihedioha, said there won’t be peace in the state since he isn’t in government.

However in a statement released on Sunday, October 16, Ihedioha said he had no link to the letter or audio in circulation.

“It appears that some people are not satisfied with their stolen mandate. They want to drag me out by an orchestrated campaign of lies. And those carrying out this campaign of calumny against my person are doing so at the behest of the same man who was imposed on Imo state.

But I understand their dilemma. Having succeeded in their evil plot of removing me from office, they realised that the bigger battle was winning the hearts and minds of the people. And that is proving difficult.

That they have failed to endear themselves to the good people of Imo State in the last 34 months is why they are now desperate. And also becoming dangerous. So dangerous that they are now working with political renegades across party lines.

While in office, Emeka Ihedioha was their nightmare. But they have also realised to their utmost chagrin that even out of office, I have remained a bigger nemesis, hence the unceasing campaign of calumny with the sole purpose of damaging my reputation and putting a wedge between me and Imolites.

In doing this, there are no off-limits. They have forged documents, concocted voice messages, perjured and maximised the social media in throwing mud to see if any one sticks.

They use issues that are very dear to our people in this nefarious project.

Two of such devious acts were a purported voice of me making threats and a letter, also purportedly written by me to the honourable Attorney General of the federation and Minister of justice, Abubakar Malami, advising him not to honour the appeal court judgement that discharged and acquitted Mazi Nnamdi Kanu, leader of the Indigenous People of Biafra, so as not to imperil the 2023 elections.

It is laughable and preposterous, knowing my background and predicament, that I will be writing to the Honourable Attorney General of the Federation, asking him to continue to illegally hold on to Nnamdi Kanu even after a court of competent jurisdiction had discharged him. What benefits will such a letter confer on me in a matter of such public concern, sensitivity and volatility. How does that make sense?”

Ihedioha also urged security agencies to investigate the source of the letter and audio attributed to him.

“While Nigerians are aware that those who can forge polling results for manufactured votes can forge anything, I have decided not to keep silent again in the face of this criminal defamation of my character because as we inch closer to the 2023 elections, the evil machinations will intensify.

I am not unduly worried, though, because our people know better. But we can no longer allow criminality to reign supreme. I therefore urge the security agencies to investigate those behind this blatant forgery and bring them to justice. Criminality should not be elevated to an art of governance. Imolites deserve better.”the statement reads in part.