The ACMI was launched on November 8 during the United Nations climate change conference (COP27) in Sharm el-Sheikh, Egypt. 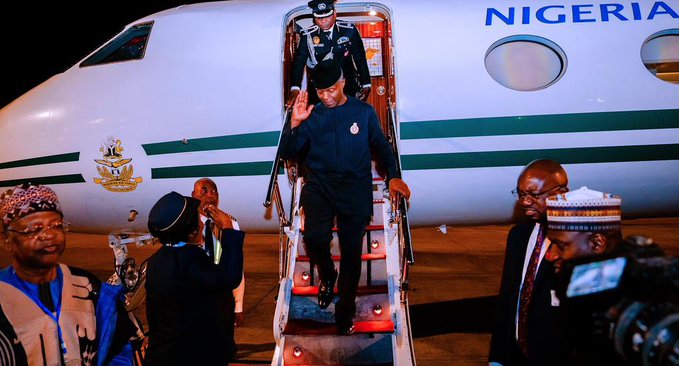 Yemi Osinbajo, the Vice-President of Nigeria, has stormed New Yok.

He arrived in New York for a high-level meeting to activate the African carbon market initiative (ACMI).

The ACMI was launched on November 8 during the United Nations climate change conference (COP27) in Sharm el-Sheikh, Egypt.

The initiative aims to support the growth of carbon credit production, create jobs and unlock billions of climate finance for Africa.

According to NAN, Osinbajo arrived in New York on Wednesday and was received by Uzoma Emenike, Nigeria’s ambassador to the United States.

He is expected to have a meeting that will lead to the mobilisation of funding and technical support for Nigeria’s energy transition plan – the strategy to reach net-zero emissions by 2060.

On December 9, he is expected to deliver a keynote address at a meeting organised by the Rockefeller Foundation, and attend meetings with global agencies and potential financial partners.

Laolu Akande, Osinbajo’s spokesperson, said through the ACMI, “Nigeria could mobilize $600 – 800 million per annum in capital by 2030 (assuming the current average price of $20 per ton of carbon) from voluntary carbon markets and potentially support 3-5 million jobs over the energy transition period”.

“In a major push for funding and technical support for the Nigerian Energy Transition Plan, Vice President Yemi Osinbajo, SAN, will be delivering the keynote address at a high-level meeting hosted by The Rockefeller Foundation in New York, with global agencies and potential financial partners in attendance to facilitate the activation of the Voluntary Carbon Market in Nigeria and on the African continent,” the statement reads.

“Participants at the meeting include the Global Energy Alliance for People and Planet, GEAPP; UN-Sustainable Energy for All, SEforALL; the UN’s Economic Commission for Africa and the U.N. Climate Change High-Level Champions, all of whom have been advocating and actively planning for the African Carbon Market Initiative.

“The high-level meeting which holds on Friday will also be attended by officials from the US government and will explore potential opportunities which carbon markets offer to generate resources for clean energy transitions while accelerating economic growth in Nigeria and other African countries.

“Ahead of the high-level meeting on Friday, Prof. Osinbajo will interact tomorrow with some of the agencies with whom the Federal Government has been engaging on the Energy Transition Plan and the activation of the Voluntary Carbon Market including GEAPP and Bloomberg Philanthropies.

“An International Steering Committee is driving the activation of African Carbon Markets in Africa, under the auspices of the African Carbon Market Initiative. Members of the Committee include the Nigerian Vice President, former President of Colombia, Ivan Duque Marquez, officials of the United Nations, United States Agency for International Development, USAID; Gates Foundation among others.”

The Rockefeller Foundation was quoted as praising Osinbajo’s “bold voice advocating for a carbon market as a solution to simultaneously accelerate economic development and address the effects of climate change in Africa”.