Ortom commended Tambuwal for the visit and expressed optimism that the crisis will soon be resolved if the group heed his advice. 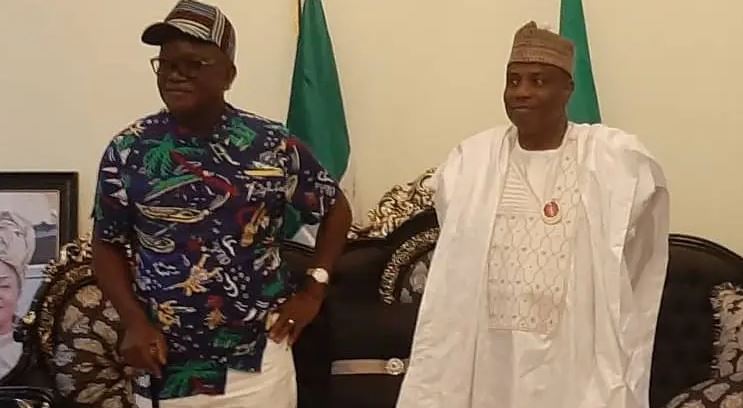 Tambuwal is the Director-General of the campaign council of the party’s presidential candidate, Alhaji Atiku Abubakar, while Ortom is one of the five PDP governors known as Integrity Group currently insisting on the resignation of the party’s national chairman, Iyorchia Ayu.

Ortom said the Sunday meeting was at the instance of Tambuwal.

He said, “This meeting is at his instance. We have discussed quite many issues, including the division in the PDP; the G-5 which I am a member. He is here principally to see how we can team up and work together as a party.

“I have told him he is welcome, we are together, we are members of the PDP. But I have said that the leadership of this party has failed to take advantage of the challenges of the party and make it stronger.

“From when we held our convention, instead of the leadership deploying its internal dispute resolution mechanism to look at the grievances that arose as a result of the primaries, no matter how stupid they were, they have failed to do this.

“Rather it is arrogance, nonchalant attitude; and nobody has cared to reach out to us even when we voiced out that things were not going on well.”

Ortom commended Tambuwal for the visit and expressed optimism that the crisis will soon be resolved if the group heed his advice.

Tambuwal, on his part, described the move to resolve the crisis in the party as a work in progress.

The governor said, “Even in our families, we have reasons to disagree and agree. At some other times when you have such disagreement and you come back together, you bond stronger and wax stronger.

“So, it is a work in progress and we have met several times but we are working to bring everybody together to work for this party. That is the mission of my being here in Makurdi.

“He (Ortom) is a principled person on the issues we are handling and we have had a very strong conversation with him of course, I will engage with the rest of our colleagues and our leaders to see how best we can come back together as one family and work towards making sure that the PDP comes out stronger and win the election of 2023.”