During the attack, the gunmen were said to have opened fire on security operatives, which led to the death of six soldiers and seven police officers. 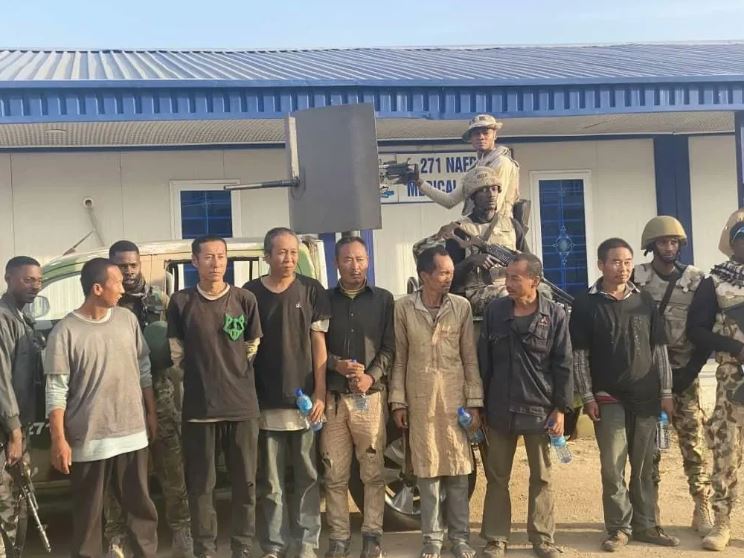 Seven Chinese nationals have been rescued from captivity in Kaduna state by the Nigerian Air Force (NAF).

On June 29, the Chinese nationals were kidnapped at a mining site in Ajata, Aboki in Shiroro LGA of Niger state.

During the attack, the gunmen were said to have opened fire on security operatives, which led to the death of six soldiers and seven police officers.

In a statement on Saturday, the air force said special forces under the 271 NAF detachment in Birnin Gwari, Kaduna, carried out the rescue operation in the early hours of Saturday.

“The combat search and rescue operation, which consisted of 35 Special Forces, was conducted in the cover of night at Kanfani Doka and Gwaska general areas leading to the terrorists abandoning their enclaves, weapons and the kidnapped Chinese victims while fleeing for their lives due to the superior firepower of the special forces,” the statement reads.

“After the successful operations, the 7 Chinese victims were flown to the 271 NAF Detachment Medical Centre for evaluation where 2 of the victims were stabilised.

“Subsequently, the 7 victims were flown to the NAF Base Medical Hospital, Kaduna, for further medical investigations.

“The chief of air staff, Air Marshal Oladayo Amao, has since congratulated the commander of the 271 NAF Detachment, Birnin Gwari, and his men for their continued determination and commitment, even in the face of danger, as they make inroad into the final fringes of terrorists’ enclaves in Kaduna State and the north-west in general.”

Speaking on the development in a statement by Samuel Aruwan, Kaduna commissioner for internal security and home affairs, Nasir el-Rufai, governor of the state, commended the air force for executing the rescue operation.

“The Kaduna state government has warmly commended the Nigerian Air Force for a clinical operation this morning which resulted in the rescue of seven Chinese nationals who were kidnapped in June by terrorists in a neighbouring state,” the statement reads.