Apart from the killings, the attackers also destroyed property worth millions of naira on that day. According to a source, the attackers torched motorcycle parks, destroyed livestock and cut down the plantain trees in the agrarian community. 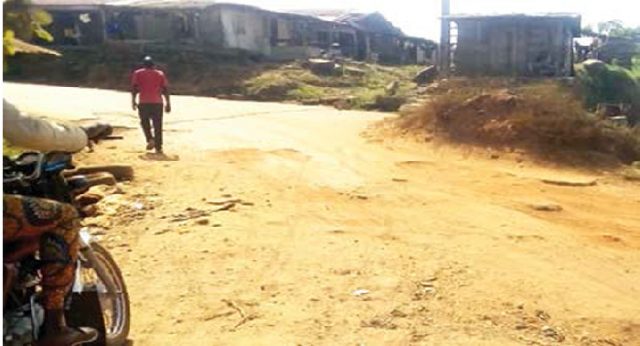 The many residents of Koseru community in the Odigbo Local Government Area of Ondo State are currently in panic.

They have yet to get over the attacks on them by some suspected hoodlums from Ikaleland in the Okitipupa Local Government Area of the state last week.

It was reported that the communal clash occurred on Saturday after about 40 armed men allegedly invaded the community shooting indiscriminately. Two people were said to have lost their lives to the attack. One of the victims, Moruf Olatunji, was a member of the All Progressives Congress and ex-councillor in the local government. The other victim was a member of a vigilante group from Ore identified only as Kayode. During the attack, some of the residents were said to have sustained varying degrees of injury.

Apart from the killings, the attackers also destroyed property worth millions of naira on that day. According to a source, the attackers torched motorcycle parks, destroyed livestock and cut down the plantain trees in the agrarian community.

It was however gathered that the incident was linked to an earlier attack on a woman identified as Juliana Abejoye, said to be an Ikale woman from one of the neighbouring communities in the Okitipupa LGA. She was said to have been earlier shot by some masked men. The attackers were allegedly from Koseru. Though the woman survived the attack as she was quickly rushed to a hospital in the area, where she is currently receiving treatment, the incident drew ire of Ikale people who in reprisal allegedly launched an attack on Koseru community.

A source told our correspondent that the residents of Koseru and other communities in the Odigbo LGA have been enmeshed in an age-old crisis with the Ikale people in the Okitipupa LGA over the land issue.

The source further said that the majority of the communities in Odigbo were being occupied by the non-indigenes from Osun, Oyo and Kwara states who have been living in the communities for a long time. The source also alleged that the Ikale people have unsuccessfully trying to take over the lands.

The source said, “The crisis between Ikale and the people in Odigbo communities, who are mostly non-indigenes from Oyo and Osun and Kwara states has been ongoing for some time. It’s recurring without any solution. Some of the issues are still in court. The Ikale people are laying claims to some of the lands in the Odigbo LGA occupied by the non-indigenes. But the inhabitants in Odigbo disagreed with them over ownership. On several occasions, Ikale people have been accused of entering into the Odigbo land illegally and harvesting their crops. This is what always causes the violent crisis. There are several cases in court regarding the issue.’’

In July 2019, there was a crisis between communities in Okitipupa and Araromi Obu in Odigbo, in which many people sustained injuries. The crisis was said to have broken out as a result of unresolved land disputes.

One of the victims of last Saturday’s violence identified only as Kabiru told our correspondent that he escaped death by a whisker as he was inflicted with machete cuts and shot at by his attackers while on a motorcycle.

Narrating the incident, the 35-year-old farmer said, “On that day, I was riding my Okada (motorcycle) going to Koseru from Kajola. I was almost getting to Koseru, when I saw some men on the road. They were about 40. I passed by some of them. And as I got into their midst, they accosted me and used a machete on me. I ran while asking what my offence was but I was told that I was from Koseru where their sister was shot.

“I tried to explain to them that we didn’t shoot anybody in Koseru but they didn’t listen to me. They continued beating me with the machete but I managed to escape and ran back to Kajola. I was arrested and taken to Ayetoro Police Station, but the policemen there said they could not handle the case because it was not within their jurisdiction. They later took me to the Baale of Oloruntedo. The man asked me if I knew anything about the attack on the woman. I said I didn’t and was not part of the incident.

“They also took me to the woman and asked her if she could recognise me as one of her attackers. She said I was not one of those who attacked her. That was when they freed me.”

Kabiru reiterated that those who attacked his community were about 40 from different Ikale communities. He added, “They always mobilise themselves whenever they want to carry out attacks. They often attack us because we don’t allow them to cut kolanut trees on our farmlands.”

In her account, another resident of the community, Mrs Olape Azeez, said the invaders stormed their community on Friday and killed some residents on Saturday.

She said that most of the residents had fled the community for fear of fresh attack, appealing to the state government to fish out the perpetrators and bring them to book.

The woman noted, “When they came, they started shooting and beating everyone in the community. They beat women, killed two people and injured many others. They said our men shot their woman and people are now deserting the community.’’

In his account, an indigene of Ikaleland , Senator Boluwaji Kunlere, who represented Ondo senatorial district between 2011 and 2015, said there was a need for the government to look into the communal clash, describing the development as unfortunate .

He said, “It is unfortunate that people that have been living together for a long time are now enemies to each other. That is part of the problems in our country when the spirit of brotherhood is no longer there and human feeling is no longer of value. What is important is that people must demonstrate leadership. I have not heard of the allegation that the Ikale people are taking people’s land. I have never seen where Ikale people fight their neighbours in my life.

“We have to be careful now that we are in a political period, many allegations would be flying around and we have to be careful and not jump into a conclusion. At least there is a government in place. We shouldn’t behave as if we have no government. The government should be able to set machinery in motion to find out what the problem is.”

In his own reaction, another Ikale indigene, Dr Raphael Ogundeji, said the allegation against his people by the Koseru people was spurious, describing Ikale people as peace-loving people who wouldn’t allow anyone to cheat them.

He blamed the government for not proffering a permanent solution to the lingering communal crisis between the Ikale and non-indigenes of Ondo living in Odigboland.

He said, “I will not take it that Ikale people are violent people. We are peace-loving people but we hate to be cheated. I am not saying this is the cause of the crisis but whatever it is, I believe we have state and local governments who are supposed to have proffered solutions to this crisis. Some years ago a crisis erupted between Araromi Obu and Ayeroro where property were destroyed. I thought the government set a panel on the issue.’’

He advocated the setting up of another panel to look into the frequent clashes over land between people in Odigbo and Okitipupa LGs and recommended a permanent solution.

Ogundeji said, “If we implement the reports of the panel, I think the crisis would have been averted.’’

Sunday PUNCH however learnt that the security agents comprising police, soldiers and men of the state security agency, Amotekun have been deployed in the area to forestall further breakdown of law and order. But in spite of the deployment of the measures, it was gathered that the Koseru residents have yet to return to their community for fear of a fresh attack.

Besides, the state government was proactive on the matter as it quickly deployed security agents in the community to restore normalcy.

The Special Adviser to the Ondo State Governor on Security Matters, Akogun Adetunji Adeleye, who confirmed the incident, explained that it happened on December 10, 2022, adding that two people in Koseru lost their lives.

Adeleye added that police and Amotekun officials were sent to the scene of the attack, but when it was worsening; soldiers were invited to support in restoring peace to the community.

He stated, “There has been an age-long issue in Oteru between the Oluku family of Ikale and Oyo-Osun indigenes living in the Odigbo Local Government Area. The problem has been dragged to court, but it seemed a party was not satisfied, hence a fresh dispute erupted in which some gunmen suspected to belong to the Osun-Oyo group attacked an Ikale woman around Kajola village. In a reprisal, Ikale youths mobilised themselves to attack the Oyo-Osun indigenes and in the process, a councillor, whose name was given as Moruf Olatunji was killed, also one Kayode, a member of a vigilante group was also killed.

“I contacted the army. We got there and restored normalcy that night until the following morning when security operatives attempted to arrest the culprits which resulted in little turmoil in the community. As I speak with you, the situation has been addressed and normalcy has also returned to the community.’’

The governor’s aide however denied a report that some security operatives lost their lives in the crisis, stating that “no operative of police or Amotekun was killed. It was a vigilante member from Ore that was killed in the brutal attack.’’

Meanwhile, the state police command said it had arrested 13 persons in connection with the incident. The suspects might likely face prosecution after the completion of the investigation.

The command spokesperson, Funmilayo Odunlami, who disclosed this to our correspondent, said, “We have arrested 13 suspects and our men are still in the area to ensure restoration of normalcy.’’

Contacted for his comment on the issue, Chairman, Odigbo Local Government, Mrs Margaret Akinsuroju, said she was not in the country when the incident happened and had yet to be properly briefed.

She stated, “I was abroad when the incident happened. I was informed but I have not been properly briefed. I will be in the office by next week and get proper briefing. After then, we shall take official step on the matter.’’