Auwal said this at a special prayer session organised by Muslim clerics in Kano, Northwest, Nigeria, for the success of Bola Tinubu's candidacy 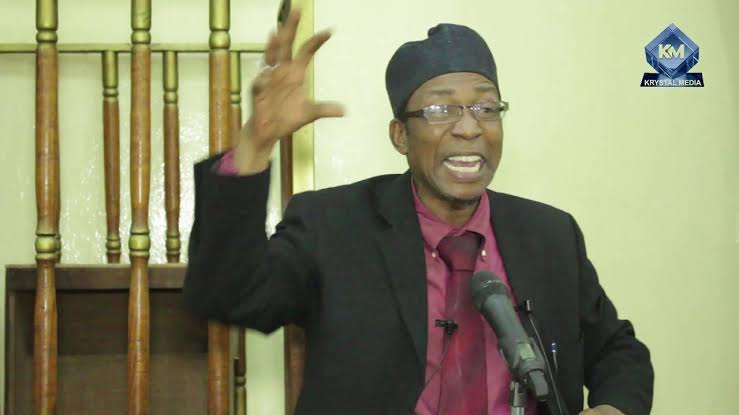 A Nigerian Islamic preacher, Abdulmutallab Mohammed Auwal has made a controversial statement concerning the 2023 presidential election.
The preacher charged Muslims to consider the All Progressives Congress (APC) and its Muslim/Muslim ticket as a call to Jihad, according to Sahara Reporters.
At a special prayer session organised by Muslim clerics in Kano, Northwest, Nigeria, for the success of Bola Tinubu's candidacy, Auwal informed that the Tinubu/Shettima’s Muslim/Muslim ticket had defined the supremacy of Islam.
He, accordingly urged all Muslim voters, to overwhelmingly vote the Tinubu/Shettima, Muslim/Muslim ticket on the day of election.
"This meeting was convened by our group, Islamic Preachers and we've invited about 75 Muslim groups, including the Kaduna State Izala and the Jos (Plateau state) Izala, the Salafiya, Kadariya, IMWAN, Muslims in Da'awa, Women in Da'awa. Also here are groups like Yoruba and Igbo Muslim groups. Last but not the least, we have here the Kano Imams' group.
"The import of today's sitting is to let the clerics and indeed all Muslim leaders know that the Muslim/Muslim ticket is not about mere promises of bringing dividends of democracy like road and infrastructure. This ticket is about the supremacy of Islam. This ticket has honoured Islam. Therefore, we'll honour it with our ballots.
"Furthermore, remember that a Muslim is always better than an infidel. What more of two Muslims combined? This informed why we undertook to create this awareness and to let all of us know that this Muslim/Muslim ticket is a jihad call to all Muslims," Auwal said.
Another cleric, who is the leader of Izala sect in Kano, Sheikh Abdallah Saleh Pakistan, disclosed that Tinubu had over a long time promoted the enthronement of a Muslim/Muslim candidate.
He said, "We've discussed extensively on how this candidate (Tinubu) has for a long time strived to actualise the Muslim/Muslim ticket.
"He paired Nuhu Ribadu with a Muslim Yoruba back then and was also instrumental to the Abiola/Kingibe, Muslim/Muslim ticket."
On his part, Kano State Governor, Umar Abdullahi Ganduje, asserted that the Tinibu/Shettima ticket would be supported by all Muslims, insisting that the practice was not new in the country.
"Muslim/Muslim ticket is not new to Nigeria. The Abiola/Kingibe Muslim/Muslim was overwhelmingly voted Muslims and it succeeded. Unfortunately a military junta nullified the victory. Another opportunity is here and thank God we're now in democracy; no one can annul the election," Ganduje averred.
See reactions below:
Ofunaofu:
Nigerians can now see where we are headed with Tinubu's demonic Muslim Muslim ticket
Xscape1993:
The major problem of the world today is religion. “If you are emotionally attached to your tribe, religion or political leaning to the point that truth and justice become secondary considerations, your education is useless. Your exposure is useless. If you cannot reason beyond petty sentiments, you are a liability to mankind.” Chuba Williams Okadigbo.
Newton2024:
I weep for christians in advance. What Bornu christians faced under Shetima and what Kaduna Christians are facing under El-Rufai will be a child's play if APC wins (God forbid) with their muslim-terrorist ticket.
SlavaUkraini:
And some idiots still believe that these guys don't have an Islamization agenda off their sleeves ?
You better Wake up from that foolish dream...
They have not won the election and they have started claiming that their religion is Supreme in Nigeria...
There would be more attacks against the church and people would be forced to convert to Islam, especially in areas where Christians are minority...
Any Christian that votes for Thïefnubu and his Mu-Mu Ticket have stained his or her hands with the blood of the Innocent Nigerians that Boko Haram have killed in the past ...
And are planning to kill, if their Mu-Mu Ticket succeeds...
They are already calling non Muslims infidels that must be taught a lesson while praising the good work of El Rufia in Kaduna State, calling him a servant of God.
The killings in Southern Kaduna would be replicated nationwide if Thïefnubu is mistakenly elected as president...
A vote for Tinubu is a vote for more Boko Haram Killings...
A vote for Tinubu is a vote for increased Insurgency
A vote for Tinubu is a vote for the Rapid Islamization of Nigeria...
Enough is Enough: Thïefnubu and his Islamic Party must Go
alsudan:
The few Christian sellouts who sell their souls for crumbs should hear this.
It’s no coincidence that PO is doing well in every region except the far North, as those people will vote a dog than a Kafir or Arne (infidel), so their votes are for AA, BT and RMK.
But if the Christians unite and vote PO, this victory will come easy.
No need to pretend about it, the 2023 elections is a religious census.
DefKon:
Damn, Religion truly is a weapon
Thanksful:
A stupid christian will tell you that religion doesn't matter.
No wonder Jesus said, "the children of this world are wiser than the children of the kingdom in their generations."
I refuse to fulfill wrong prophecy as a Christian.
I don't know about you
JOemmy:
Tinibu and his apc are really determined to completely destroy this country groups like ipob, yoruba nation agitators and militants in the niger delta are waiting to help them achieve this very quickly.
Top Stories