Bring Back Fayose! - Chris Ngige Goofs At APC Rally For Fayemi Ahead Of Guber Election (Video)


A video which emerged online and is making the rounds on social media, showed how a Nigerian Minister goofed during the APC Mega rally in Ekiti State by not being able to differentiate between Ayo Fayose and Kayode Fayemi. 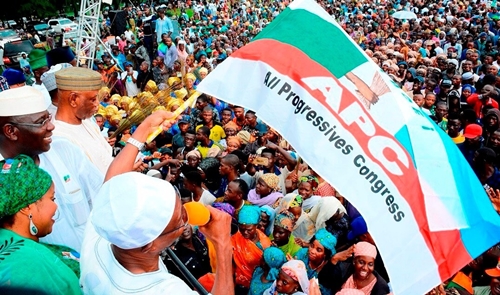 File photo: APC mega rally
The Minister of Labour and Employment, Chris Ngige, on Tuesday afternoon, unwittingly implored the Ekiti people to vote for Governor Ayodele Fayose of the Peoples Democratic Party (PDP) instead of Kayode Fayemi's All Progressives Congress (APC) in the forthcoming gubernatorial election.
The minister made this gaffe at the APC Mega Rally held in Ado-Ekiti ahead of the governorship election.
While other speakers addressed the crowd without a hitch, Ngige in a bid to canvass for the party’s candidate, Kayode Fayemi, the erstwhile Minister of Solid Minerals and Development, called on the crowd to vote Fayose, the incumbent governor of the state.
Fayose is not one of the 35 contestants in the July 14 governorship election, but the governor is backing his deputy, Prof. Kola Olusola, the candidate of the PDP.
Speaking in Pidgin English, a popular and widely accepted local parlance in the country, Ngige unknowingly said Fayose, a staunch critic of APC and President Muhammadu Buhari, was the better choice.
He said, “Will it happen on Saturday? Those who want Saturday with Permanent Voters’ Card (PVC) and everything to happen raise your hands.
“Mr. President and leaders of our party, the people have agreed and on Saturday, it will happen.
“We thank the leaders of our party, especially those from the South-west for forgiving Ekiti people for the mistake they made in 2014.”
At this point, the leaders of the party including the president and his Special Assistant on Foreign Affairs and the Diaspora, Abike Dabiri, were all smiles without knowing what was coming next.
Ngige continued: “They won’t make that mistake again. If you marry two wives, you will know the better wife. Fayose is the better wife.
“Fayose cooks and gives her husband food. She doesn’t give him trouble. So you must bring Back Fayose on Saturday.”
With this repetition, Abike Dabiri who had obviously had enough was seen frantically tapping his shoulders and whispering Fayemi’s name to him.
In response to his appeal to the crowd to vote for Fayose, they shouted a resounding no, which made the labour minister to be bewildered at the turn of events.
Meanwhile, people were heard screaming Fayemi in undertones, to make him realise that he goofed.
As expected, the video sent the social media space into stitches as people wondered what made the minister to campaign for the opposition.
Watch below;
Top Stories