The military junta of Ibrahim Babaginda had annulled the 1993 election adjudged as the freest and fairest in the nation's history. 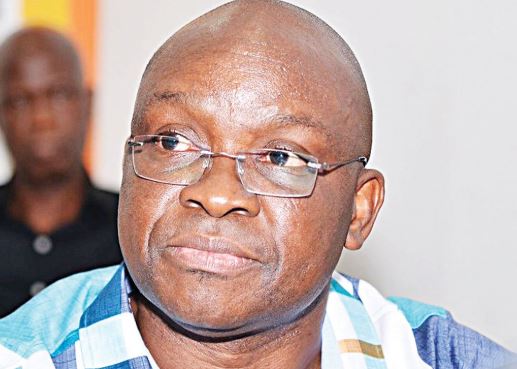 Ayodele Fayose
A former governor of Ekiti State, Ayodele Fayose, has commended President Muhammadu Buhari for honouring MKO Abiola, presumed winner of the June 12, 1993, presidential election.
The Cable reports that last year, Buhari declared June 12 as Democracy Day and also conferred a post-humous award of Grand Commander of the Order of the Federal Republic (GCFR) on Abiola.
He also apologised on behalf of the Federal Government to his family for his death in the struggle to reclaim his mandate.
The military junta of Ibrahim Babaginda had annulled the 1993 election adjudged as the freest and fairest in the nation’s history.
On Wednesday, the President also named the Abuja National Stadium after Abiola.
Reacting to this, Fayose, a critic of the President, took to his Twitter account to knock Obasanjo and hail Buhari.
“Honouring MKO Abiola by Buhari is to Obasanjo’s shame. It remains a sore-point of his political history that because of ego, Obasanjo, who’s the greatest beneficiary of the June 12, 1993 struggle, failed to honour his kinsman, MKO Abiola. So, I commend President Buhari,” he tweeted.
Top Stories