NYSC Doctors, Others Protest Against Borno Govt Over Unpaid Allowance


The frustrated corps medical personnel explained that they were left with no option than demanding the immediate payment of their monthly allowance. 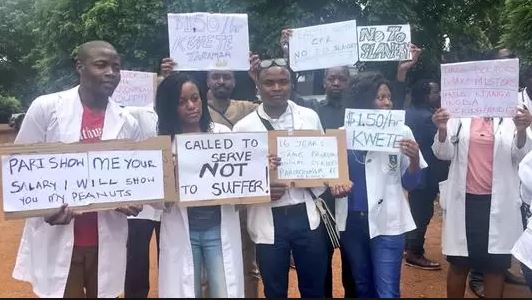 File Photo
Fifty (50) medical practitioners undertaking the National Youth Service Corps (NYSC) in Borno State on Monday stormed the government house demanding immediate payment of their over five months allowance.
DAILY POST reports that the corps members, who comprise 2018/2019 Batch B, 2018/ 2019 Batch C and 2019/ 2020 Batch A, threatened not to vacate their accommodation to make room for their incoming colleagues if the government failed to meet their demands.
Dr. Azi Cornelius, who led his colleagues during the peaceful protest in front of the Maiduguri government house, said his members had made frantic efforts to get the authority to offset their monthly allowance but all fell on deaf ears.
The frustrated corps medical personnel explained that they were left with no option than demanding the immediate payment of their monthly allowance, which ranges between N100,000 for doctors and N 50,000 for other health workers.
“The former governor, Kashim Shettima announced payment of N100,000 to each of the medical NYSC doctors and N50,000 to other medical corps members in the health sector, unfortunately, the payment has stopped for a while now.
“We have 64 doctors and other medical corps members which brings our total number to 190.
“We are here to intimate the Borno State Governor of our unpaid stipend. We have written different letters, we even threatened to stop work until two months was paid but the summary of all is that most of us will be passing out on Thursday and we have between five to six months unpaid stipends, we want the government to pay us,” Cornelius said.
The medical corps members leader added that his members constitute over 50 per cent of the medical workforce in the state and have been discharging their duties effectively and efficiently. He urged the Borno government not to discourage other corps members with non-payment of allowance.
“The most demanding thing is that most us do calls – but unfortunately we sleep in the hospital without food. It’s regrettable to say that we lost a corps member last year, Dr Ike Stephen, he had worked for 72 hours, he died while crossing the road to buy watermelon to eat,” Cornelius revealed.
However, the Permanent Secretary, Ministry of Health, Alhaji Mustapha Alau said the Governor has already directed the Ministry of Finance to pay the corps members.
“I’m going to the office now to effect the governor’s directive, but for now I cannot confirm the number of months to be paid,” Alau said.
Top Stories