One of the students who was killed during the protests that took place at the Federal University of Oye Ekiti has been buried. 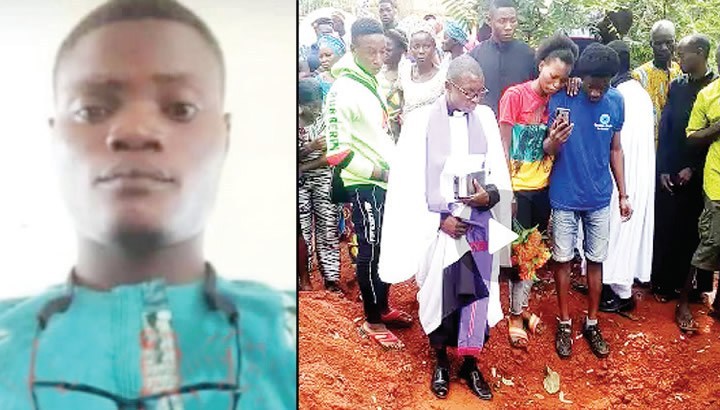 The burial
According to a report by Punch Metro, there was outrage on Thursday as one of the slain students of the Federal University of Oye Ekiti, Oluwaseyi Kehinde, was buried in Ido Osi, Ekiti State.

It was gathered that the atmosphere was sombre fellow students, friends and family members bewailed the killing of the 100-level student of Crop Science and Horticulture.

Footage of the church funeral service posted on social media showed a relative of the deceased standing beside the coffin as he sang a dirge.

The Secretary General of the FUOYE Students Union Government, Mohammed Iliyas, said Kehinde’s burial was witnessed by his parents.

“We even requested that the corpse be kept for a while so that we could give him a befitting burial, but the parents insisted; that the funeral must be immediate,” he added.

The victim was one of the two students allegedly shot dead by policemen attached to the Ekiti State Police Command during a demonstration over power outage on the campus of the institution.

Tuesday’s protest had ended around 2pm without any incident until the students allegedly had a confrontation with the cops attached to the convoy of the wife of the state governor, Bisi Fayemi.

Kehinde and Joseph Okonofua were allegedly gunned down by the policemen, while two others, who were injured, were admitted to hospital.

The President of the SUG, Oluwaseun Awodola, said the police shot dead Kehinde and Okonofua, a 300-level student of Biology Education.

The state Police Public Relations Officer, DSP Caleb Ikechukwu, had insisted that the police did not fire shots at the students, saying instead, the undergraduates damaged police vehicles and assaulted officers.

He also claimed that the students attacked the convoy of Mrs Fayemi.
The governor’s wife, in her defence, said the killings did not take place while she was at the scene.

However, video evidence revealed the moment policemen chased some of the students and shot straight at them.

A 15-second footage showed four policemen aiming shots at some of the protesters.

Some female students filming the incident cried out in fright as the officers shot at their targets.

Another clip, which is about seven seconds long, also showed two policemen chasing some other targets and firing directly at them.

The two clips were confirmed by students as scenes from the demonstration.

As Kehinde was buried, Nigerians took to the social media to demand the identities and prosecution of the killer cops.

One Awopeju Shina said, “Nigeria Police Force is supposed to protect the people, but the reverse is the case. Innocent students are their targets. The police officers must be brought to book.”

A Twitter user, @Cityzenn_PR, wondered how the police would justify the shooting, describing their action as unprofessional.

“This is a shame to the Nigeria Police Force…looking for students to shoot,” another user, Adeboye Harmeen wrote on one of the clips.

The convener of the #EndSARS campaign, Segun Awosanya, in a series of tweets, said Mrs Fayemi should be held liable for the deaths.

He noted that her refusal to condemn the action of the policemen was an indictment on her.

“You claim not to have ordered the killings, yet you have not condemned the action of the murderous convoy or expose the killers. Instead, you justified the murder of our citizens by alleging falsely that you were under attack. An action, which only proves you pulled the trigger!” he wrote.

The activist also wondered why the state Commissioner of Police was not doing anything about the killings.

“Where is the Commissioner of Police in Ekiti in all this? Is the state that lawless that rogue police officers can now kill innocent citizens at will?” he asked.

Meanwhile, the FUOYE Vice-Chancellor, Prof. Kayode Soremekun, on Thursday, approved the constitution of an investigative panel to look into the protest and the reported attack on the governor’s wife.

Soremekun confirmed the approval for the setting up of the panel in a telephone chat with journalists in Ado Ekiti.

An internal memorandum signed by the Director of Administration, Olatunbosun Odusanya, to the VC, states, “The VC may wish to recall the recent students’ misdemeanour of September 10, 2019, and the consequent expanded management meeting, where it was resolved that an investigative panel must be set up to investigate the root causes of this action and to nip in the bud future occurrences.”
The memo, entitled: ‘Constitution of investigative panel’, suggested a 12-member committee to be chaired by the Deputy Vice-Chancellor, Prof. Abayomi Fasina, with representatives of the police, Department of State Services, Nigeria Security and Civil Defence Corps and the National Association of Nigerian Students.

The state Commissioner of Police, Mr Asuquo Amba, said two students had been arrested over the incident.

Amba noted that two of his men were injured and two police vans were burnt during the attack.

He also alleged that two rifles stolen from the police during the crisis had been retrieved.

“It is sad that the police are being attacked by criminals and the civilians, who we are protecting. We won’t rest until the perpetrators of this dastardly attack are arrested and brought to justice,” he said.

However, NANS urged the Federal Government to probe the killing of the two students.

The apex student body, which described the two deceased students as promising Nigerians, noted that they were cut down in their prime.

The National Public Relations Officer of NANS, Azeez Adeyemi, accused Mrs Fayemi of dishing out what he called falsehood in a bid to absolve herself of any blame.
Top Stories