Jubilation As Kidnapped Kaduna Schoolgirls And Teachers Regain Their Freedom


The schoolgirls and teachers who were kidnapped in Kaduna state have finally regained their freedom. 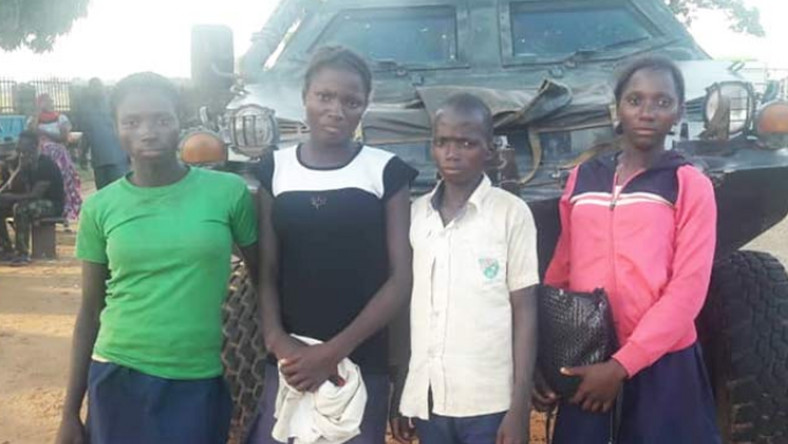 According to Punch Metro, six female pupils, two staff of the Engravers College, Kakau Daji in Chikun Local Government Area of Kaduna State have been released by their abductors.

This is coming 23 days after their abduction by heavily-armed men suspected to be kidnappers.

The pupils and the two staff were released after the payment of ransom, our correspondent learnt.

“They were released after the payment of an additional N10m which was taken to the kidnappers on Friday. You know the parents earlier raised N3.6m as ransom but the kidnappers said it was small. This brings the total amount paid as ransom to N13.6m,” a source said.

The source, who spoke on the condition of anonymity told our correspondent that the pupils and their teachers, who were kidnapped on Thursday, October 3, 2019 were released by their abductors on Saturday morning.

Some gunmen had abducted six female pupils and two staff of the school.

The source stated that the process to secure the release of the girls and their vice principal (academics) and matron, began on Friday.

“We took additional N10m to them and they have now released the children and our staff.  We have just evacuated them. They (kidnappers) released them this morning.

“We paid the ransom (N10m) yesterday (Friday). They started moving out yesterday but it was late. So, they have to sleep at one point, then, this morning, they continued their journey.”

We are relief by the release, says Kaduna Govt

In reaction to the release of the schoolgirls and the two staff of the school, the Kaduna State Government said it was relieved that the kidnappers have finally released them after 23 days in captivity.

In a statement by the State Commissioner for Internal Security and Home Affairs, Mr. Samuel Aruwan, the state appealed for considerate reportage of the victims “ordeal and respect their privacy.”

Aruwan said, “The students and staff of the Engravers College who were abducted have regained their freedom today, Saturday, 26 October 2019.

“We are relieved that this criminal violation of the right to liberty is over and that they are all back safely.

“The victims, most of whom are minors, and their families will now be focusing on recovering from this undeserved trauma. We appeal for considerate reporting of their ordeal and respect for their privacy.

“As we continue to combat banditry, kidnapping and other crimes, the Kaduna State Government urges all our communities not to give comfort to criminals.

“The state government calls for vigilance in all our communities and continued cooperation with the security agencies in this battle to secure our state and all who live in it.”