Busted! How A Vandal Was Caught Hiding Inside A Swamp With N1 Million Cables In Ogun


An alleged vandal has been caught by the NSCDC hiding inside a swamp with N1 million cables. 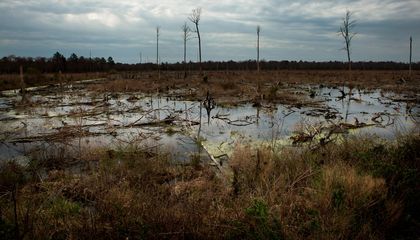 Ahmed Hassan, a suspected vandal, has been arrested by men of the Nigeria Security and Civil Defence Corps, Ogun State command while he was hiding inside a swamp with vandalised cables valued at over N1 million, a report by Punch Metro has shown.

The  State commandant of NSCDC, Hammed Abodunrin disclosed this in a statement issued by the command’s public relations officer, Dyke Ogbonnaya on Friday.

The commandant said the suspect was arrested at Ijumo-Ologboni village in Ewekoro-North Local Council Development Area of the state.

Abodunrin explained that Hassan was arrested on October 12 following a tip-off from members of the community who raised the alarm over vandalisation and theft of the armoured cables in their area.

The commandant added that Hassan was caught inside the swamp, while two other members of his gang fled at the sight of the NSCDC officials who stormed the area.

He further explained that Hassan claimed to be a motorcyclist  and that he was hired by two people whom he identified as “Dogo and Yellow.”

Abodunrin who ordered a manhunt for the two fleeing suspects said  items recovered from the suspect were six armoured underground cables, connected to the left and right poles of the newly constructed light rail across two villages in the LCDA by the Federal Government.

He said, “Investigations confirmed vandalisation of six armoured underground cables connected to the two poles of the newly constructed light rail across Asipa-Ilao and Ijumo-Ologboni communities.

“Our checks revealed that vandals invaded the area during rainfall to perpetrate such crime knowing quite well that movements were usually restricted at such times.”

He added that the village and its environs had since been thrown into total darkness.

The commandant said investigations were ongoing on the issue, vowing that his men would surely apprehend the other two suspects still at large.