Osinbajo's Move To Delay Sacking Of His 35 Aides Fails


Yemi Osinbajo's intervention to delay the sack of his aides by President Muhammadu Buhari suffers a big blow. 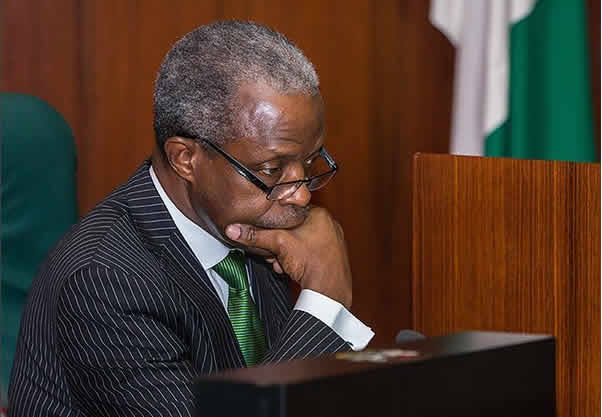 Yemi Osinbajo
Vice-President Yemi Osinbajo’s moves to delay the sacking of his aides were not successful, The PUNCH learnt on Wednesday.
An online newspaper, Daily Nigerian, had earlier on Wednesday reported that about 35 of the aides were sacked. However, The PUNCH could not independently confirm the exact number as of the time of filing the report.
It was learnt that the VP’s office had sought to delay the matter till the return of President Muhammadu Buhari to the country from London on November 17.
The delay was said to have been sought to allow the VP discuss the issue with the President, but the Presidency reportedly went ahead to effect the sacking.
“There was an intervention for a delay, but the decision was effected while the President has yet to return (to the country),” a source said.
The source claimed the Chief of Staff to the President, Mr Abba Kyari, effected the action.
One of the affected aides was said to have been denied clearance to access the Villa on Wednesday from the Pilot Gate of the Presidential Villa.
Osinbajo, it was learnt, had allegedly more aides than Buhari, some of whom were appointed while he was the acting President when Buhari was in London in 2017.
A top source at the Presidency said, “It is true that many of VP’s aides were given termination letters. However, I cannot confirm the exact number because it was not done in public. But you know it is political.
“Some of those dismissed are those who had been made redundant since the VP’s duties have been reduced and some of the social investment programmes have been put under other ministries.”
Another source said the President was not aware of the sacking of the VP’s aides, saying it was the handiwork of the cabal in the Presidency.
Aides to Osinbajo as of 2017, according to Premium Times, were about 52 while those of the President were 25.
However, other appointments were said to have been made for Osinbajo which were never made public.
Some of the aides, it was learnt, were being paid by donor agencies and not directly by the Federal Government.
The President also appointed four more aides for Osinbajo in August 2019.
They are Ahmad Zakari (Special Adviser on Infrastructure), Obafela Bank-Olemoh (Senior Special Assistant on Education Interventions), Louis Odion (Senior Technical Assistant on Print Media) and Ajuri Ngelale (Senior Special Assistant for Public Affairs).
When contacted for comments on the sacking of the aides, the Special Assistant on Media and Publicity to the President, Mr Garba Shehu, said, “The SGF has responsibility for the issuance of letters of appointment, and where the need arises, sack letters as well.”
But the Director of Information, Office of the SGF, Willie Bassey, told one of our correspondents on the telephone that he was not aware of the sacking.
“I am not aware of any letter. I am hearing such thing from you for the first time. I am not aware of it,” he said.
The Senior Special Assistant to the VP on Media and Publicity, Laolu Akande, did not respond to enquiries by the newspaper.
Culled from Punch
Top Stories