A gunman, who stormed a hospital and killed as many as six persons, has gone on to commit suicide. 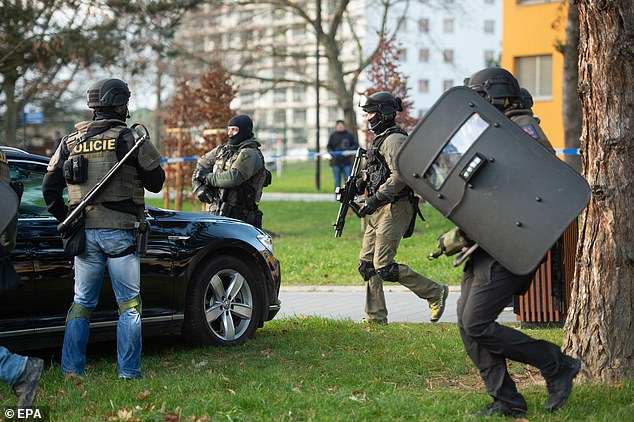 A gunman who opened fire today in a hospital in the Czech Republic killing six people and seriously injuring two others shot himself when police tracked him down.

The suspect, named locally as Ctirad Vitusek, entered the building at around 7am this morning in the Czech city of Ostrava and opened fire in the trauma unit waiting room at close range, aiming at victims' heads and necks.

A manhunt was launched with patients and staff evacuated from the building as armed police swarmed the area and put the building on lockdown.

Authorities advised 'maximum possible caution' as the man was 'armed and dangerous' after he fled the scene in a silver Renault car.

When officers cornered the 42-year-old suspect around three hours after the massacre, he shot himself in the head while sitting in his vehicle, police said.

Interior Minister Jan Hamacek said police found the suspect's car and he shot himself as they approached and died from his injuries about half an hour later.

'Police found the car, there was shooting heard from the site. We are establishing the identity of the man who shot himself in the head', Czech police said on Twitter.

Officers hunting the gunman asked the public for help in identifying him by posting on Twitter a CCTV image of him walking the hospital corridors.

The photo showed the suspect wearing a red and black jacket, with police adding he fled a silver Renault car.

The suspect allegedly shot people at close range as they sat waiting in the trauma ward of the Faculty Hospital in Ostrava, a steel hub located around 190 miles (300 kilometres) east of Prague.

Some nurses were seen hiding behind parked cars as the shooting unfolded and the building had to be evacuated while police boosted security across the country.

The number of people killed was initially said to be four with two injured, but that figure quickly rose to six dead, Health Minister Adam Vojtech told Czech Radio today.

Four victims were pronounced dead at the scene and two others succumbed to the injuries they suffered, local media reported.

Hamacek added that police will be investigating his motive, saying: 'I'd like to assure the public that there's no danger anymore.'
A witnesses described the moment the shooter walked in and began firing before reloading his weapon.

She told TV Nova: 'He came into the waiting room and started firing at the people waiting there before the surgery. When he fired the magazine, he reloaded the gun and fired again.'

Four men and two women died in the attack, according to hospital director Jiri Havrlant said.

Havrlant told a televised briefing that one victim died in surgery and another two were seriously injured and needed to be operated on, but no medics were hurt, he said.

There has been no suggestion by authorities on the possible motive for the attack.

The the shooting took place at the trauma ward of the hospital on the third floor, the DNES daily newspaper said.

Prime Minister Andrej Babis told Czech public television the shooting took place in a waiting room. He added he is heading for the site today.

'The gunman was allegedly shooting from a close range, aiming at the head and neck', Babis added to Czech broadcaster CT24.

Populist billionaire, Babis said the shooting was 'a catastrophe' and added: 'It's something we're not used to in our country. I absolutely don't understand the motive of this young man.'

President Milos Zeman also sent in condolences, saying in a tweet: 'I'm with you in my heart, I'm thinking of you in these tragic hours.'
Czech police said they were strengthening security around 'selected soft targets' across the rest of the country as a result of the shooting, including at medical faculties in the capital Prague.

He was said to have be travelling in a silver-grey Renault Laguna and was described as 'probably armed and dangerous'.

Video footage and pictures published by local public radio appeared to show police arresting a person at the site but police did not immediately confirm that it was the suspect.

Police published a photo of the suspect, having withdrawn an earlier photo of a different man. They said that man was now considered to be an important witness.

The hospital was evacuated and armed police worked to secure the surrounding areas.