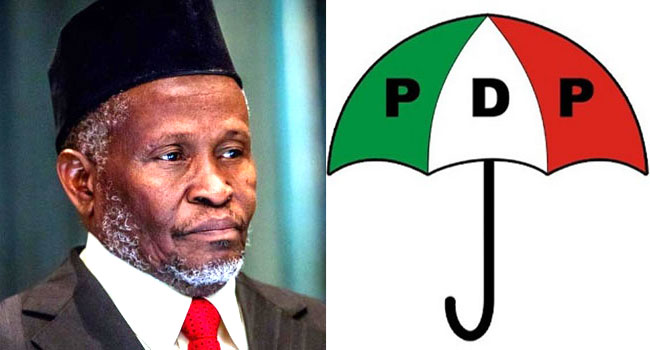 Chief Justice of Nigeria, Tanko Muhammad
The Peoples Democratic Party (PDP) has attacked the Chief Justice of Nigeria, Tanko Muhammad asking him to step down following the controversial Imo governorship election verdict.
The demand by the party comes two days after the CJN chaired a seven-man panel of justices of the Supreme Court which presided over the appeal from the Imo State governorship election.
According to Channels Television, the National Chairman of the PDP, Mr Uche Secondus, asked the CJN to step down while reacting to the judgment of the apex court during a press conference on Thursday in Abuja.
He explained that the opposition party made the demand in order to prevent a breakdown of law and order in the country.
Secondus said, “In other to avoid an imminent breakdown of law and order, the PDP demands that Justice Tanko Muhammad immediately steps down as CJN and chairman of the National Judicial Council as Nigerians have lost confidence in him and a Supreme Court under his leadership.”

On Tuesday, the Supreme Court nullified the election of the PDP candidate, Mr Emeka Ihedioha, as the governor of Imo State.
It, thereafter, ordered the Independent National Electoral Commission (INEC) to withdraw the certificate of return issued to Ihedioha and give same to Senator Hope Uzodinma of the All Progressives Party (APC).
The judgement has sparked mixed reactions from the ruling and opposition parties, as the APC celebrated the victory while the PDP rejected the decision of the apex court.
In his reaction, the PDP national chairman alleged that the judgement was a product of manipulation, and clear coup d’etat against the will of the people of Imo State.
He demanded that the decision of the Supreme Court on the election be reviewed and reversed in the interest of justice.
Secundus also asked the CJN and members of the panel to recuse themselves from the pending petitions on Sokoto, Bauchi, Benue, Adamawa, Kano, and Plateau States.
“Justice Tanko must not head the panel to determine the remaining election petitions before the Supreme Court,” he said.
The PDP national chairman added, “We demand that Justice Tanko Mohammed, the CJN and his colleagues on the Imo governorship panel recuse themselves from the remaining cases involving PDP in the Supreme Court.”
Top Stories