Following the recent Okada ban, The Save Climate and Democracy Naija Coalition has issued a seven days ultimatum to the govt to lift the ban placed on Okada riders. 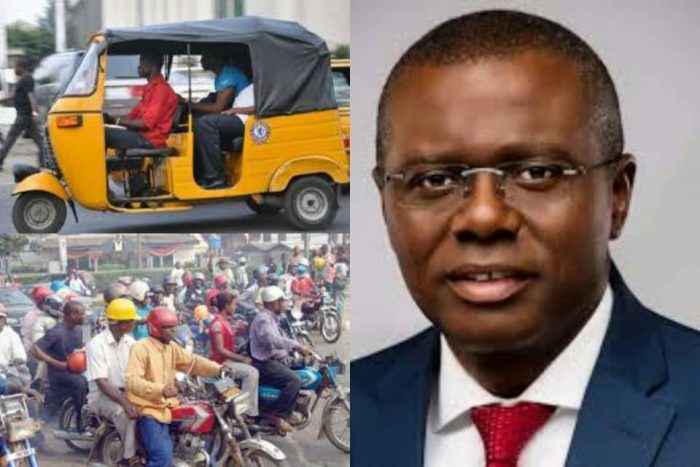 The Save Climate and Democracy Naija Coalition, on Wednesday issued a seven-day ultimatum to Lagos State Governor, Babajide Sanwo-Olu, to lift ban on the operations of motorcycles and tricycles.

It vowed to institute a lawsuit if Sanwo-Olu refused to reverse the order.

Ayo Ademiluyi, the spokesman, said the government would face “Take Back Lagos protest” if the ban was not lifted in one week.

“The group hereby issues the Gov. Babajide Sanwo-Olu-led Lagos State Government a seven-day ultimatum to cease and dissipate on Feb. 11, to reverse the ban on “Okada” and “Keke” operators.

“We shall on the said date hold citywide “#tackbacklagos protest”, NAN quoted him as saying.

The group lamented that the ban without an entire upgrade of the existing transportation system and industrialisation to absorb the large army of the unemployed will lead to crisis.

“We have been proven right as the chaos and anarchy is here for everyone to experience.

“Lagosians have been trekking long distances like the Biblical Children of Israel,” he said.

Ademiluyi further wondered why government failed to put the palliative measures in place before the order.

Meanwhile, Lagos State chapter or the All Progressives Congress (APC) has lambasted Jimi Agbaje, for condemning the ban.

The former Lagos governorship candidate of the Peoples Democratic Party (PDP) had said “formal operators that have thus far regulated themselves should be allowed to continue”.

The ban on the operations of commercial motorcycles and tricycles in six local government areas and nine local council developments councils came into force on February 1.

In a statement, Seye Oladejo Lagos State APC Spokesman noted that Agbaje’s comment was a futile attempt to teach a government well grounded in intellectual and institutional experience how to plan.

He said Agbaje had relative and inconsequential experience in business and zero idea about governance at any level.

“The gradual implementation of the law is a reflection of the thoughtfulness of the government not to create a shock in the polity.

He added: “The people remain the focal point of the Sanwo-Olu administration while not losing sight of its onerous responsibility to ensure the safety of lives and property of the citizenry.

“Whatever skill or ability to organize possessed by Mr Agbaje and his co-travelers will be better deployed to resuscitate the moribund opposition party on life support machine.

“The efforts to mobilize and sponsor violent protests against a well meaning government policy are also not lost on all and sundry.”