LOL! Hillarious Video Of Nigerian Writer Stringing A Scammer Along Which Ends With The Scammer Cursing Him


A Nigerian writer shared a funny video of him leading a scammer along which ended with the scammer cursing him out. 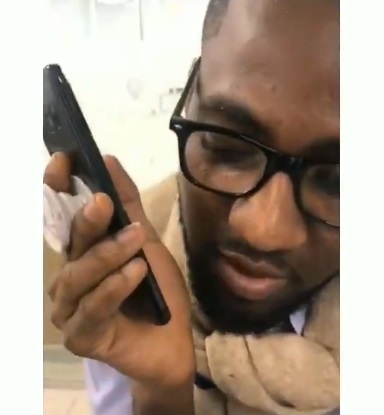 Nigerian writer, Deoye Falade angered a scammer when he played along during a call which the fraudster thought was going his way.

During the call, the scammer asked for the details of his ATM card and the writer kept supplying him with the personal details he demanded. However, when he asked for the three digits at the back of the card, Deoye let him know he was on to him.

"419," the writer said when the scammer asked for the final details that would enable him to steal the money in the writer's account.

At this point the scammer realized Deoye was playing him and he called him a bastard in anger and cut the call.

Watch the hilarious video below.

Nigerian writer, Deoye Falade leads scammer on in hilarious video that ends with the scammer cursing him.