One of Yemi Osinbajo's escorts who escaped the Vice President's convoy crash has lost his wife. 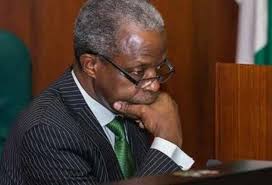 Yusuf Bawa, one of the outriders attached to the office of Vice-President Yemi Osinbajo, ought to be on duty at the time of the accident that led to the death of one of his colleagues.

TheCable had reported how one of the escort riders in the convoy of Nigeria’s number two citizen died in an accident on Friday.

The vice-president was heading to the Nnamdi Azikiwe International Airport in Abuja when the unfortunate incident happened.

He had put off a trip he was making to Lagos so as to honour Ali Gomina, the police inspector who was knocked down while trying to clear the way for the motorcade of the vice-president.

TheCable gathered that Gomina had stepped in for Bawa, who was attending to his sick wife. Sadly, his wife died on Saturday morning.

Osinbajo paid a condolence visit to the family of Gomina, whose youngest child is just two days old.

During the visit to the residence of the deceased officer in Gui, Abuja Municipal area council, Osinbajo assured them that the federal government would support the family in anyway necessary to ensure they are comfortable.

The late Gomina who lost his first wife, Ajara, on September 29, 2016, is survived by his second wife, Asiya, and 12 children.

His second son, Abdullahi, and first daughter, Hafsat, described the deceased as the best father anyone could ask for.

They, however, appealed to the government to offer them scholarship to enable all of them go to school. They also cried out for help to enable them complete a house he had started to enable the family move in.

Speaking to the media after the visit, Laolu Akande, spokesman of the vice-president, said the federal government will do all that is necessary to ensure the family is comfortable.

He said: “The vice-president has come to commiserate and console with the family of late Inspector Ali Gomina that lost his life during official duty. He was killed when a vehicle rammed into him, another vehicle came and hit him and threw him against another oncoming trailer. The vice-president had immediately aborted the trip and said he was going to come today.

“He had asked us to come ahead of him yesterday and inform the family and the village head. He came today personally to express his condolence to late Gomina’s family, wife, children and the entire community. And to say himself and the federal government of Nigeria will continue to support and do everything that is necessary to comfort this family. He is greatly saddened by what has happened. We will support in all necessary ways.”

Asked if the government will look into the scholarship requested by the children, Akande said: “That won’t be a problem at all.”

On the completion of the house the late police escort started, the VP’s media aide said: “Government will do everything that is right and is worthy of diligent and hard working officer like Inspector Ali Gomina.”