The heartbreaking story has been told of a Nigerian housewife who was burnt to death along with her two children. 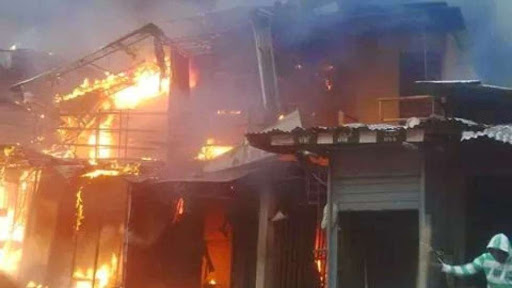 According to The PUNCH, a 26-year-old housewife and her two children have been burnt to death at their home in Sabon Gida, Yelwa, a suburb of Bauchi metropolis in Bauchi State.

It was learnt from a source that the incident occurred on Monday when the woman’s husband was refuelling a generator.

The source said the fuel poured on the ground and flowed to the kitchen, which went up in flames.

It was gathered that the man escaped with serious burns, while his wife and their one-year-old and four-year-old children were burnt to death.

The source stated, “The man was refuelling his generator; although the engine was not running at the time, the fire started when the fuel poured on the ground and flowed down to the kitchen, where his wife was cooking, and the kitchen was engulfed in fire.

“He was the first to be burnt, but he threw away the gallon of fuel he was holding and the fire spread.

“The generator was engulfed in the fire and the inferno spread to his motorcycle that was parked in front of the wife’s apartment.

“His wife, who had gone into the house to pick something, could not come out with her two children, because they were trapped inside.

“She held her two children tightly in her arms and they were roasted by the fire.”

The source added that the man, whose name he gave as Umar Tukur, sustained burns from his waist down to his feet and his hands.

“His first wife managed to escaped with her only child; it was his second wife, who died in the inferno,” he added.

According to the source, Umar did not know that his wife and children were burnt to death, because he was unconscious.

“It was on Tuesday morning that he regained consciousness and he heard about the demise of his wife and children. In fact, when he opened his eyes, the first thing he said was, ‘Where are my children?’ And later on, he was informed about the incident,” the source said, adding that the deceased were buried according to Islamic rites on Tuesday.

When contacted, the Police Public Relations Officer in the state, Kamal Abubakar, confirmed the incident to our correspondent.

He said, “Yes, it is true. There was a fire outbreak at Sabon Gida in Yelwa on Monday, March 30, 2020, around 8pm. A police patrol team and men of the fire service were called and they made efforts to extinguish the fire.

“The victims were evacuated to the Abubakar Tafawa Balewa University Teaching Hospital, Bauchi, for treatment.

“Later, three of the victims died from the injuries they sustained. The deceased were a 26-year-old mother, Zainab Umar, and her two children, a male and female.

“The male was four-year-old, while the female was one-year-old.

“The fire was caused by a generator and the man, whose name is Umar Tukur, is still in hospital receiving treatment.”