The interview was conducted by the Nigeria Television Authority and the recorded video is now circulating on social media. 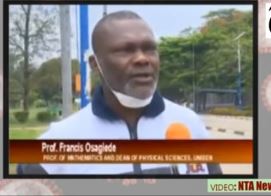 A professor of Mathematics at the University of Benin (UNIBEN), Francis Osagiede, has been mocked by Nigerians for his gaffes during an interview on the spread of coronavirus in Nigeria.

The interview was conducted by the Nigeria Television Authority and the recorded video is now circulating on social media.

Commentators mocked the professor for his poor grammar and unsubstantiated comments on coronavirus control measures.

In the viral video, Mr Osagiede related the surge in the number of people infected with the virus to “a geometrical progression” and said if not checked “this will become an exponential increasement.”

The university teacher said the cause of the increasing figures was because “people are not ‘adapting’ to the isolation (quarantine) rules.”

In March, the Nigeria Centre for Disease Control recommended that only returnees from abroad and persons with ‘symptoms’ must observe a mandatory 14-day self-quarantine – an attempt to flatten the curve of the infection.

But for Mr Osagiede, going into ‘isolation’ for two weeks or more means “the COVID-19 pandemic and the symptoms will go.”

“They say if you go in isolation for two or three weeks, the COVID-19 pandemic and the symptoms will go,” he said. “If you abide by the rule that NCDC provided, it will be okay. It will decrease exponentially.”

Responding to the professor’s interview on Facebook, Farooq Kperogi, a professor of journalism at the Kennesaw State University, United States, said the video could pass for a comic relief as “it is infinitely funnier than many of Nigerian comedy kits I’ve watched.”

“The tragicomic ignorance of both the reporter and the professor made me laugh until I cried! They would make an excellent comedic duo,” Mr Kperogi added in the Facebook post he shared on Monday.

Another Facebook user, Muhammad Rislan, said while the professor’s English inadequacy could be excused by some people, his inability to give an expert opinion should be a matter of concern.

“His ‘expert opinion’ lacks logic at best and seems like a beer parlor talk at worse,” he commented under Mr Kperogi’s post mocking the professor.

“It made me sad. What an aggressively ignorant and inarticulate professor. An embarrassment,” another user Paul Nwabuikwu, said, still under Mr Kperogi’s post.

Excerpts of the interview

REPORTER: Here with me is a professor of mathematics from UNIBEN who is going to help us analyse the increasing figures of coronavirus across the country.

It were be like an exponential increasement because from geometric, it will go farther than…it will no go into exponential, so the reason why it is happening is because people are not ‘adapting’ to rules.

They say when you in isolation for two or three weeks, the COVID-19 pandemic and the symptoms will go. If you abide by the rules that NCDC provided, it will be okay. It will now become decreasing…it decreases exponentially.