What Nigerian Pastors Said About COVID-19


There is no denying the fact that in Nigeria, pastors hold divergent views on COVID-19. 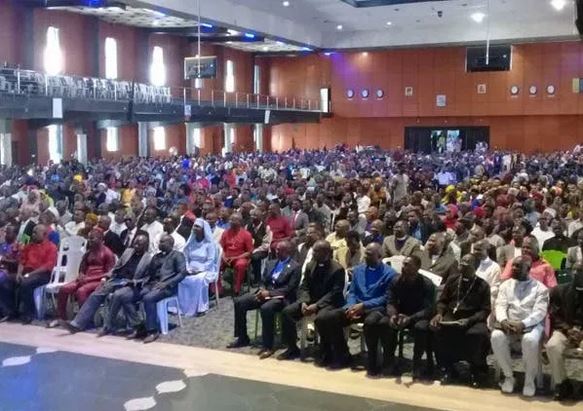 As most churches, synagogues and mosques worldwide remain shut, religious leaders are taking faith online to ensure God’s word gets to the millions marooned by the pandemic.

Religious services are being streamed on Facebook, Instagram while prayers are being posted by video link and timeless texts shared on cellphones to bring spiritual support to the hundreds of thousands of believers denied a place of worship.

The highly contagious respiratory disease that originated in China has pushed governments on every continent to impose draconian lockdowns, hitting sport, shopping, travel and faith.

From China to the United States, many religious groups have suspended services and moved faith online, trying out new ways to stay close to their communities, as holy sites and public spaces also remain shut, changing the face of many world cities.

Churches have historically been a place of sanctuary in times of crisis and closures have caused disarray.

Besides broadcasting services, some have come up with novel initiatives to raise morale among those confined to home.

Only those whose time has come will die—Adeboye

In Nigeria, Pastor Enoch Adeboye , the General Overseer of the Redeemed Christina Church of God, RCCG, says God told him world will be on compulsory holiday. Adeboye said he didn’t include this vision on coronavirus in the new year prophecy because he thought it would be a terror attack. Pastor Enoch Adeboye describes Coronavirus as a compulsory public holiday from heaven.

He said, “He told me loud and clear that the whole world will be on compulsory holiday. I knew the time the world got close to a compulsory holiday was when there was an attack on the World Trade Centre in America.

“So, when he said the whole world is going to be on compulsory holiday, I thought something like that was going to happen as it happened during 9/11.

Describing coronavirus as a public holiday declared from heaven, Adeboye said God will remove the plague once he achieved his purpose.

Adeboye also urged Nigerians not to panic as corona virus spreads across Nigeria, adding that only those “whose time has come” will die of the corona virus disease. Pastor Adeboye also said the pandemic will soon be over after God intervenes and lessons have been learnt by mankind that God is in control He said that the current COVID-19 outbreak ravaging the world will end soon.

In his sermon during the lock-down, Pastor Chris Oyakhilome of Christ Embassy told his members in a sermon that the lock-down over corona-virus was the 5G and the new world order where some figures of authority in the world were trying to build a religion, economy and government for the entire universe.

Quoting Revelation Chapter 13, he said there is no need for a vaccine, adding that these are part of the Antichrist’s plan for a new world order.

In a viral video where Pastor Chris was responding to questions, the cleric maintained his earlier claims and further explained that President Muhammadu Buhari was forced to lock down Abuja and Lagos so that the 5G could be installed.

He insisted that Corona virus did not kill anyone in the Wuhan City of China but 5G did.

“In Nigeria for example, the Federal Government intervened and shut down… declared a total lockdown for Abuja and Lagos even though the State Government had given their own instructions for the lockdown already but it was not enough.

“ I love technology. I’m a science and technology enthusiast, just studying the capabilities of the 5G I’m wowed and would like to go into it right away but at the same time I’m into healing and meeting with sick people every time. So, no matter how enthusiastic I am about the 5G technology I’m going to think of health implications and put my concern for the health risk involved.”

But in his response to Oyakhilome, Pastor Matthew Ashimolowo of Kingsway International Christian Centre, KICC,criticized Pastor Oyakhilome and other pastors who are attributing the COVID-19 pandemic to 5G and Antichrist.

He equally expressed disappointment in pastors who are allegedly bringing up what he described as ‘foolish’ conspiracy theories.

In short video posted online, Ashimolowo described as fake news any claims of links between the 5G network with spiritual things and Corona-virus epidemic.

“It’s fake news to associate 5G to corona-virus,” he said.

Ashimolowo, warned Christians not to promote conspiracy theories about the coronavirus, questioning why the virus was present even in villages with no 5G network.

“If corona virus is caused by 5G, why is it in his village that does not have a 5G?”

Also, Pastor Sam Adeyemi of  Daystar Christian. Centre debunked claims by Pastor Chris Oyakhilome that churches were shut down by the government in order to install the 5G network.

Making reference to 1918, Adeyemi said churches, mosques, schools and markets were also shut in Nigeria during the influenza pandemic and it was not Antichrist.

It will be over on March 27th – TB Joshua Declares

The founder of the Synagogue Church of All Nations (SCOAN), Temitope Balogun Joshua, simply known as ‘T.B. Joshua’ was actually the first to put his credibility on the line when he predicted an end to the deadly Corona-virus pandemic.

The famous man of God mentioned the end of March 27, 2020, specifically as the time the novel virus would go away at its own will, saying the situation cannot be remedied by the power of medicine because it was not a medicine that brought it.

“I came out at the beginning of this year saying last year will end in March and the year will continue to be very fearful till this month [March]. On March 27th, it will be over. By the end of this month, whether we like it or not – no matter the medicine they might have produced to cure whatever, it will go the way it came. If it is not a medicine that brought this to the world, medicine cannot take it out. It will go the way it came,” he said to much applause from his congregation.

Recently, the man of God declared that it would rain for one week in China’s Wuhan and wipe off the virus. There has been a decline in new infections in China but it is unclear if it has anything to do with the T.B Joshua’s prediction.

It will end in April —Chukwuemeka Odumeje

Controversial Nigerian prophet, Chukwuemeka Odumeje,in his declaration about the dreaded coronavirus stated the virus will be gone in April. Odumeje, The Lion, is no doubt one of the most controversial figures in Nigeria today. The way he carries himself, the way he preaches, the way he conducts deliverances and all of it is different. Some see him as a new breed of T.B Joshua.

The 40-year-old based in Onitsha, Anambra runs a church called Mountain of Holy Ghost Intervention and Deliverance Ministry Inc., a.k.a the Land of Freedom and is one of the prominent in the South East, Nigeria.

Prophet Emeka Odumeje in a new video which is now circulating on Social Media,said “On the first week of April, I will come for you Corona-virus in every country in the world, in overseas. You will know why I am the end of sickness.” He went ahead to say “I lay curse on China”, adding that he’s coming for India next.

It will end soon— Oyedepo

Pastor Oyedepo also predicted the end of the corona-virus pandemic in Nigeria – The respected man of God, who spoke through his son who is also a senior pastor, said COVID-19 will soon become a thing of the past in the country. Oyedepo disclosed this while donating an ambulance and Personal Protective Gears (PPE) to the Ogun state government.

Oyedepo was represented by his son who, Pastor David Oyedepo (Junior), who is also a senior pastor in the church.

Earlier, he courted controversy when he introduced account numbers where members of his Church should continue to pay tithes and offerings, despite the lock-down.

Celebrated priest and the Spiritual Director of Adoration Ministry, Enugu, Nigeria (AMEN), Rev. Father Ejike Mbaka after being abused for not seeing vision of the virus, has urged Nigerians not to fear as God will heal the world as he cursed the virus.

“Corona virus, wherever you came from, be it any name you answer- caterpillar virus, Venza virus, corolla virus, I command you to be ceased, in the Holy Ghost fire!

“Children of God, when you go home, circulate the message that a man of God known as Fr. Ejike Mbaka told you not to be afraid of coronavirus, be courageous it will soon be a thing of the pass.

“Fear is a dangerous omen if you become perplexed; it shows that you don’t believe so much on God’s power. Ebola came, it died off. This one will also die off. It is like bird flu disease, it will come and go. I know that the whole world is waiting to hear for the message that will come out from this place, but the message I have is that the disease will soon go.

“Under the priestly anointing, I release healing to the entire world, particularly where the disease is ravaging so much, let there be healing, let there be sun-ray always, which is one of the antidotes to the disease. God release drug that will cure it in Jesus name.”

The agenda is to create a new world order—Apostle Suleiman

For the  general overseer of Omega Fire Ministries International, a church with its headquarters in Auchi, the agenda behind COVID-19  is to create a new world order.

In a statement he issued, he said: ”The Lord said I gave this world to man and as such I don’t do anything in the world until man invites me with understanding in the place of prayer. The nation in question (China) has sinned greatly against the Lord. They wanted to make their own moon shine brighter than the natural moon. Their power tussle is between a particular nation and they want to bring that nation under their feet.

“Covid-19 is an experiment and they are happy that they could shake the world and they would wait for another two years. In 2022, something worse will still come and it will originate from them.

“The world leaders are coming together to make a synergy that will make all religions have a common ground and the Pope is part of it. America is their target but the current President Donald Trump is their obstacle. America should not joke with the next general elections as they will all support the opponent.

“Their agenda is to humiliate him(Trump). They have succeeded in humiliating him while they are free from it but the prayer of the saints will reverse it and America will be healed. The virus was manufactured by this people (China). It is not a biological issue, it is a chemical weapon.”