TRAGIC!! Female Student Allegedly Stabbed To Death After She Resisted Armed Robbers Who Tried To R*pe Her Inside Her Home In Ibadan


Days after the r*pe and murder of UNIBEN student, Uwa,a UNIBADAN student has been stabbed to death for resisting armed robbers who attacked her home and tried to sexually molest her. 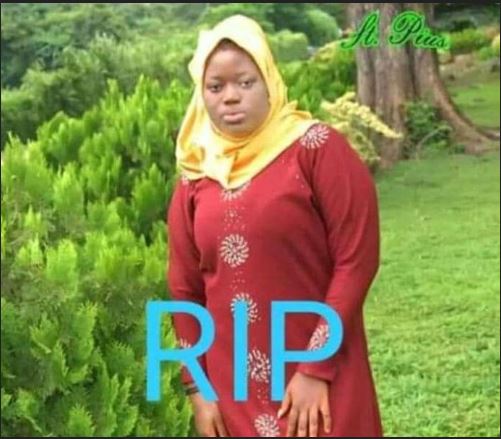 A female student of the Institute of Agricultural Research And Training IAR&T in Ibadan, Oyo state, Bello Barakat, was allegedly stabbed to death on Monday, June 1 by armed robbers after she resisted their attempt to rape her.

Facebook user, Tunji Olatunji, who shared the story online, said the robbers had attacked Barakat's home and during the robbery tried to rape her. She resisted them and in the process, they stabbed her to death.

This story comes days after a UNIBEN student, Uwaila Omozuwa, was raped and murdered by yet to be identified persons inside a church in Benin city, the Edo state capital.

''Now, these times are not funny.

Bello Barakat has fallen too. A student of IAR&T Oluyole, Ìbàdàn. I gathered their home was attacked yesterday afternoon by supposed robbers who tried to finish on a romp.

Barakat resisted their attempt to rape her and she was stabbed to death. We hope and pray that the perpetrators of this evil will be fished out.

The girls are getting more endangered. The society must do something. I am not just worried because I am a father to 19 year old student too, but I am really concerned because girls and women deserve better. They deserve respect and protection from the society. They are not objects for use in carnality.

I think it is time to start a new campaign to mould the boy child. The new generation of boys seem to be posing much danger to the advocacies for the girl child over time.

It is my earnest prayers that the killers of #Barakat and #Uwa and every unreported assaults and deaths be brought to justice.'' he wrote. 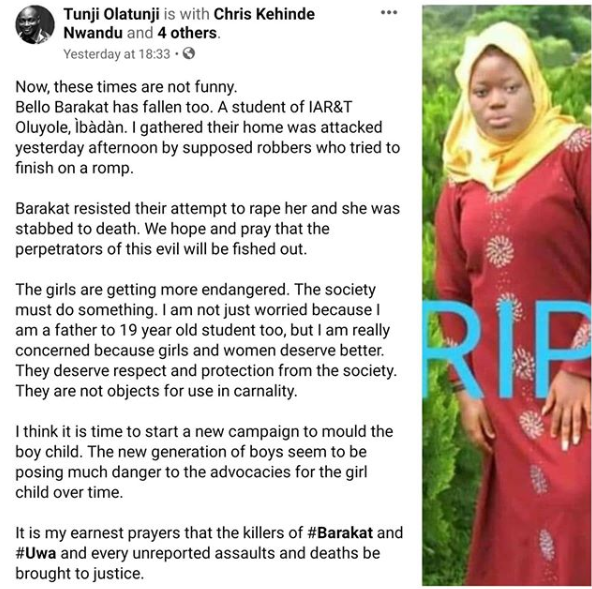