The very horrific incident is said to have exacerbated residents’ concern about their safety. 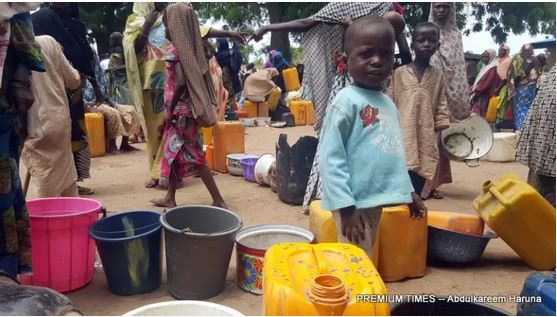 A nine-year-old boy was on Monday killed and his teenage brother injured by an explosive device they had taken to an internally displaced persons (IDP) camp in Maiduguri, Borno State for their father, PREMIUM TIMES reports.

The kids had taken the device from Bama on the instruction of their father who is a suspected member of Boko Haram.

The incident has exacerbated residents’ concern about their safety.

Bama, the second largest town in Borno, is 72 km from Maiduguri. It is one of the local government areas in the state worst affected by the Boko Haram insurgency.

Many young people in the town were believed to have subscribed to the Boko Haram ideology, the reason the community was displaced for over five years after several attacks by Boko Haram until the military began to liberate it in 2018.

Last year, the state government began a gradual return of the civil populace while rebuilding of the entire community.

With the recent opening of roads connecting other Borno communities with Maiduguri, residents can now easily travel to visit their relatives outside the state capital.

Sources said the boys delivered the parcel to their mother, who kept it in her room.

Witnesses said the mother later received a call from her husband to confirm “if the message was safely delivered.”

“Unfortunately, the boy that delivered the parcel became curious about the parcel they helped their father to transport from Bama to the Farm Centre IDP camp in Maiduguri,” said Danbatta Bello, a senior official of the Civilian-JTF who is familiar with the incident.

Mr Danbatta said the boy sneaked into the room to search the parcel where he found concealed in it a cold piece of metal that looked like a toy.

“He brought the metal out, not knowing that it was explosive and he and his younger sibling began to play with it in the presence of their grandmother.”

Mr Danbatta who was among the personnel investigating the incident said the piece of steel suddenly exploded as the boys were attempting to use a stone to open its aluminum covering.

“The nine-year-old boy died instantly while his grandmother and two other siblings survived with serious injuries,” Mr Danbatta who doubles as spokesperson of the Civilian-JTF told PREMIUM TIMES.

The mother of the boys reportedly said she was not at home when the explosion occurred.

“But she confirmed that she received a message from her husband from Bama even as she denied knowledge of the content of the parcel,” said the Civilian-JTF official.

“However the grandmother of the child confirmed to us from her hospital bed that she overheard her daughter receiving a call from the husband who asked if she had received the parcel, and then told her to wait for his further instruction.”

A source at Farm Center IDP camp who was also familiar with the incident said “the explosion was massive” and could have been more fatal had it occurred in a crowded place.

Mr Bello said the father of the child later came to Maiduguri upon hearing the calamity that befell his family.

“He is denying knowledge of the whole incident, but we have arrested him and he is currently under investigation,” he said.

“He has not convincingly disproved the testimony of the child’s grandmother who said she overheard him telling his wife to await his further instruction concerning the delivered parcel.”

Mr Danbatta said security officials have become suspicious of the incident as it happened on the same day two other suicide bombings were carried out by females in Konduga town.

“One of the female suicide bombers succeeded in killing herself and a civilian, while the second suicide bomber died alone after her suicide belt went off,” Danbatta said.

Reacting to the recent explosion incidents, a local non-governmental organisation, Kalthum Foundation for Peace (KFP), called on the government to raise the bar in the monitoring of the traffic coming in or leaving the state.

“While calling on parents to watch over their children more than ever before, so that they won’t end up, directly or indirectly, as recruits of the insurgents, we equally beseech the government to deploy technology-based surveillance in detecting the influx of human-borne explosive devices.”

Despite renewed claims by the military that government troops are winning the war, Boko Haram and their ISWAP collaborators have continued to carry out attacks on soft targets around the state.

The Boko Haram insurgency started in 2009 when the Islamic group decided to pick arms with the wild motive of setting aside the constitutional democracy to enforce Sharia rule.