Bose Abiodun, who had her fourth child in prison, has shared her really heartbreaking experience. 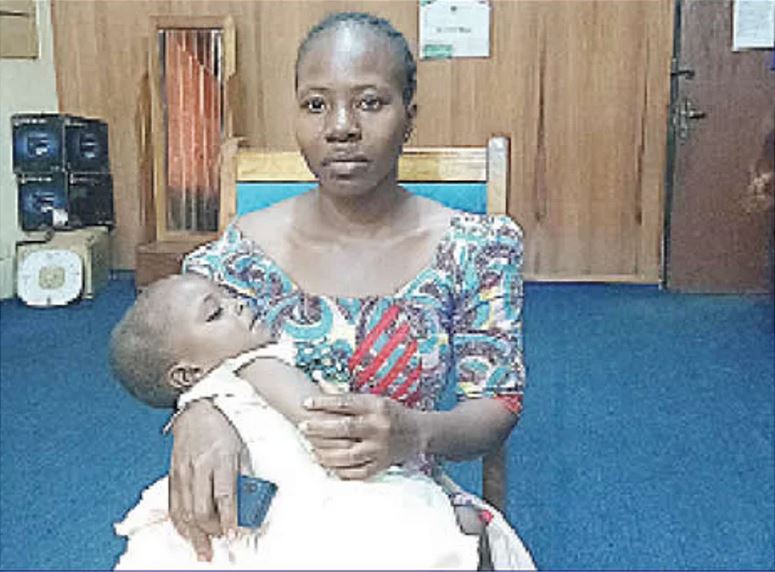 Thirty-five-year old Bose Abiodun, who has four children, spent 25 months in Ilesha Correctional Centre after her husband, Femi – under trial for manslaughter – whom she stood surety for, jumped bail. Abiodun, who had her fourth child in prison, shares her experience with BOLA BAMIGBOLA

I am a native of Ijebu-Jesa in the Oriade Local Government Area of Osun State. I am a tailor and was also doing petty trading alongside before I was put in prison. I am a mother of four children –three boys and a girl. I had the girl while in Ilesha Prison.

What led you to prison?

I stood surety for my husband, Femi Abiodun. He was arrested after he mistook a man for an animal during a hunting expedition and shot the person. The person eventually died. He was a hunter in Ijebu-Jesa.

How did you get involved in the matter?

The matter started in January 2014. He was arrested and arraigned. The court remanded him in Ilesha Prison and he spent a year and some months there. Our lawyer later secured bail for him. But my brother-in-law (husband’s elder brother), Dele, and I had to stand as sureties. While my husband was on bail, we appeared before High Court 6 in Osogbo about three times. Before I was arrested and sent to prison, my husband had stopped going to court.

Didn’t you know about it?

I knew he was no longer going to court. He moved out of the house in December 2017 and till date, I have not seen him. He left me with three kids and quietly ran away.

What did you do after your husband moved out of the house?

In the first few days, I was calling him repeatedly. He used to answer my calls; he would tell me he was working to raise money. He promised to return home as soon as he had some money. But few weeks after, he stopped answering my calls.

His lawyer came to our house and informed me that my husband and his brother had stopped appearing in court. I was scared but there was nothing I could do. On April 11, 2018, I was arraigned and remanded in Ilesha Prison because the accused I stood surety for had run away.

Before your eventual release, were you not appearing in court?

I was taken to court on May 5 and October 9, 2018. Aside from those two occasions, I was not taken to court. I always asked prison officials for the date my matter would come up, but they used to tell me no date had been picked for the matter.

You had a baby while in prison, how did that happen?

I didn’t know I was pregnant until few days after I was remanded. I took ill and was taken to a clinic inside the prison. After examination, I was told by the officials there that I was few months pregnant.

So, what did you do after you realised you were pregnant?

I told my mother and brother, who were always coming to check on me, about it. I was delivered of the baby on a Sunday; it was on September 2, 2018. I had been in labour since around 8pm on Saturday (previous day) and to the glory of God; I put to bed around 3.30pm on Sunday without any complications. I had mixed feelings though; I was happy I was delivered of a healthy baby without complications and was sad that it was while I was in incarceration.

The baby was named Oyinkansola by the leaders of a church that usually visited the prison. She is my fourth child. My first child will be 11 years old this month (June 2020).

How did you secure your release?

My name was not on the list of inmates to be released on the day I was released. It happened that someone came to look for me and I was told that the Chief Justice’s panel wanted to meet me. I was elated when I saw the lawyer, Julie Olorunyomi, because she was involved in my matter. I was asked questions about how I got to prison and after sharing my story, I was granted amnesty.

On getting home, I realised my world had shattered. When I left my three boys with my mother, she was hale and hearty.  But when I was released, I learnt she died while I was in prison. I was told she died on December 30, 2018. She and my elder brother used to come together to see me in jail but at some point, she stopped coming. When I asked my brother why she stopped coming, he said she was fine. Anytime my brother came around and I asked after our mum, he would say she was fine and that I should calm down.

How did you feel when you were released?

On the day I was to be freed, I woke up feeling extremely happy. That morning, my daughter packed her clothes and said, “Mummy, let’s go home.” Oyinkansola would wake up and sing songs of praise; she is 20 months old now and has never asked about her father.

After I returned home, I realised I had nothing anymore; the little things I was trading in were gone. My kids and I are with my aged father now. I am helpless and need the support of everyone. My parents had sold their belongings before my mother died.

Do you think you can forgive your husband?

I don’t think I can ever forgive him for what he did to me. Though before the case in 2014, he did what he could do within his capacity but after he returned from prison, he became irresponsible. He started womanising and that led to a misunderstanding between us in December 2014. I don’t want to be with him again or any other man. I have enough (children) to cater for. I just want to be able to start a new life.

I am not really educated; I dropped out of school at Senior Secondary School 2 but I want something better for my children. I want them to have the best of education. My three boys were attending a public school while I was in prison. Life in prison is not good at all. Although they fed us, being in incarceration is never a good experience. My daughter was getting diapers through donations made by churches and mosques. My brother also brought (diapers) for me. A group from Lagos, Anchor Heritage, came to the facility to train us to have some skills, especially on how to make decorations but I would prefer to go into trading if I get (financial) assistance.

I met with the legal aid council on October 9, 2018 when I was taken to court and she empathised with my daughter and promised to take over my case. I am from Ijebu-Jesa and my husband is from Ekiti State. His parents reside in Ido. They didn’t come to check on me while I was in prison and they were aware I was there. I called them and my brother also spoke to them in person, yet they were not moved.