Things came to a head yesterday as members of the Kaduna State House of Assembly fought over mace. 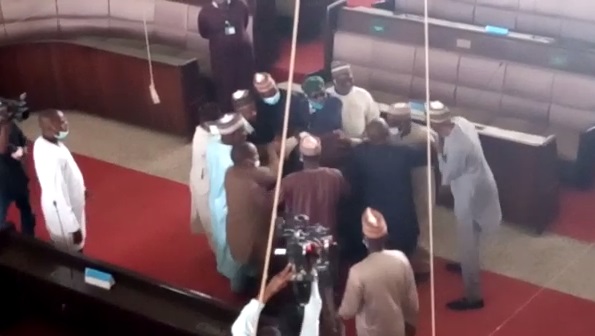 Kaduna House of Assembly members fighting over mace and impeachment of Deputy Speaker
Some Kaduna lawmakers have engaged in a free-for-all fight over a mace shortly after impeaching the Deputy Speaker of the House of Assembly and swearing-in a new one.
Recall that we had reported that Mukhtar Isa Hazo, the former deputy speaker of Kaduna state house of assembly was impeached after his colleagues passed a vote of no confidence on him.
However, things took a different dimension when some of his supporters tried to intervene as they were against his impeachment.
Fight however started after Hon. Liman Dahiru, the lawmaker representing Makera Constituency broke into the floor of the Assembly and seized the mace.
However before he could leave the complex, he was grabbed by the Sergeant at Arm while other members quickly rushed in to retrieve the mace from him. This led to a rowdy session at the assembly, before Dahiru was dragged out.
The Nation reported that the lawmaker who attempted seizing the maze was seen later with a torn cloth outside the Assembly Chamber, expressing his anger over the impeachment of Hazo.
Here is the video below: