The woman was arrested and detained at the Ebonyi State Criminal Investigative Department on trumped up charges, while the police are demanding N200, 000 to grant her bail. 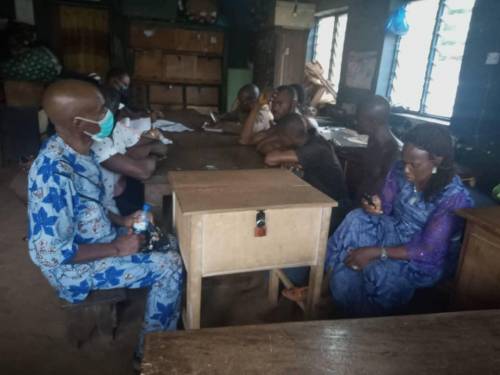 The police on Wednesday afternoon arrested one Mrs Orji, who was physically assaulted by Chindeu Nicholas Makwe, a director with the National Health Insurance Scheme on June 12, 2020 at her husband’s farm in Ovumnte, Ishiagu, Ebonyi State.

SaharaReporters gathered that the woman was arrested and detained at the Ebonyi State Criminal Investigative Department on trumped up charges, while the police are demanding N200, 000 to grant her bail.

She was taken away by officers of the state CID at Ivo Police Station after being invited by the Divisional Police Officer, Nwornu Daniel, in respect of a complaint she made against Makwe, who has the backing of former Senate President, Pius Anyim.

The ex-lawmaker had employed thugs led by Makwe to terrorise residents of the community.and forcefully take over their lands.

Mrs Orji had earlier made a complaint against Makwe on June 13 but the DPO refused to investigate the matter or make any arrest.
It took the intervention of lawyers and members of the community before she was granted bail around 9pm on Wednesday and told to report back for questioning on Thursday.

Makwe, a brother to member of the House of Representatives representing Ohaozara/Ivo Federal Constituency, had last Friday led thugs and surveyors into Moses Orji’s farm where they placed beacons on the land despite a bailiff of the state High Court of Ebonyi served on them (FORM 48/Notice of disobedience to court order).

Orji and his wife, who arrived to feed their remaining livestock, left after Makwe had used a bulldozer to destroy the farm in January, 2020 in company with thugs.

Mrs Orji then brought out her phone to video and take pictures of what Makwe and the surveyors were doing on the farm despite a court order.

Realising his pictures were being taken, he rushed to the woman with four thugs and pushed her to the ground, then kicked her and attempted to take her phone from her.

The woman hid the phone in her cloth and shouted for help on top of her voice that they wanted to tear her clothes and take her phone.

It was at that point that they left after verbally abusing her.

When contacted by SaharaReporters, the police in Ebonyi refused to speak on the matter, stating that there was a court case on the issue.

Man Sponsors His Girlfriend Abroad For Her MSc, Now She is Engaged to Another Man
Recent Stories