Jacob, who is the general overseer of his church, was arrested for allegedly r*ping a 16-year-old girl. 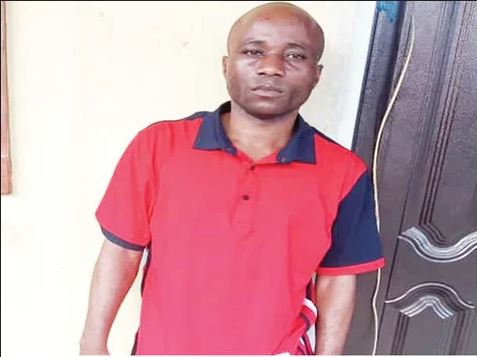 The pastor has been nabbed

PUNCH Metro reports that barely 24 hours after the Akwa Ibom State Commissioner of Police, Imohimi Edgal, paraded 12 suspected rapists, including a pastor, one Prophet Nnamso Jacob of the Living Power of Zion Church has been arrested for a similar offence.

A statement by the command’s Public Relations Officer, Nnudam Fredrick, on Thursday, said Jacob, who is the general overseer of the church, was arrested for allegedly raping a 16-year-old girl.

The victim was said to have visited the prophet in the church located at Nduese Eduo, Okon Eket, in the Eket Local Government Area of the state for counselling and deliverance.

She was reportedly given appointment by the pastor to come for spiritual adoption on June 23, 2020, and she was allegedly administered an intoxicating substance after which Jacob allegedly took advantage of her.

The statement read in part, “The Akwa Ibom State Police Command, under the leadership of the Commissioner of Police, Imohimi Edgal, has arrested another clergy, one Prophet Nnamso Friday Jacob, 35, who allegedly raped a 16-year-old girl.

“Investigation revealed that the victim previously visited the so-called prophet and General Overseer of the Living Power of Zion Church, situated at Ndue Eduo, Okon Eket, Eket LGA for counselling and deliverance, but was given an appointment by the suspect to report back on June 23, 2020, for spiritual adoption.

“Consequent upon the appointment, the victim visited the prophet on the scheduled date.

“However, while she was in the prophet’s counselling room, the suspect administered an intoxicating liquid substance on the victim and thereafter took advantage of her and had unlawful carnal knowledge of her.”