Nemesis caught up with the 26-year-old sales boy who for the past 12 months has taken turns to defile the 11-year-old twin daughters of his employer. 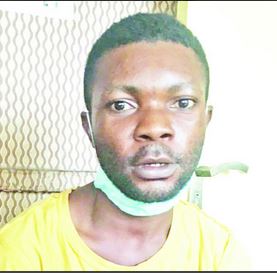 He was employed as a sales boy in a restaurant but rather than concentrating his energy on serving customers, for a whole year, he was busy defiling the twin daughters of his employer right inside the canteen.

Nemesis however caught up with the 26-year-old sales boy in Lagos, Chinedu Obi who for the past 12 months has taken turns to defile the 11-year-old twin daughters of his employer.

His atrocity was exposed when his madam who had gone to Ijesha market in Surulere area of the state came back to the restaurant early and met him busy with one of the twins. She raised the alarm and invited the police who moved in and arrested the suspect.

The state police command spokesman, DSP Bala Elkana who confirmed the incident said that the suspect was arrested on June 16, 2020 as soon the mother of the victims alerted the police.

The mother of the victims (Names withheld) who owns a restaurant in Surulere told the police that the suspect who is her sales boy defiled her daughters repeatedly. She said she got to know about it when she returned from the market and overheard the twins fighting over the sharing formula of N200 given to them by the suspect. The twins confessed to her after much pressure. She told the police that the suspect was treated as part of the family hence the closeness to her children.

A native of Umuaka in Imo state, Chinedu blamed the devil for his act. According to him, “Sometime in 2018, I relocated to Lagos in search of greener pasture. Luckily, I met one Calabar woman who owns a restaurant at Soluowu Street in Surulere. She employed me as a sales boy and the agreement was that she would pay me N400 everyday and feed me. I used to resume work around 6am everyday and close for the day at about 8pm. My whole life was dedicated to that job that I did not have the opportunity to toast a woman.

“I was so close to the family that the children were free with me and take me as their elder brother. One day, they came straight to the shop and one of the twins not minding that I was there removed her school uniform and changed into another one. This was when the devil took over my senses. I have not had sex for so long time, so I was moved. I waited for an opportunity when she was alone and told her that I will be giving her plenty of money if she will allow me to have sex with her. I was surprised that she agreed without making noise, we quickly did it behind the counter; I cleaned her up and gave her N200.

“I was shocked when her twin sister came to me and pulled up her dress. She said that I should do the same thing with her because she also wants her own money. I had no choice but to also have sex with her for fear that she will tell her mother.

“All I did was to always divide the money into two and give to them. I even wanted to stop when my madam started suspecting that I was having sex with her daughters. The twins started bleeding and I did not understand what was happening to them. I thought it was because of the sex and asked them to use tissue or paper to clean the blood. My mother only gave birth to boys, so I did not understand that they have started their monthly menstruation.

“When their mother noticed the blood she was surprised because they were only ten years then.  She confronted them if they have started having sex and they kept quiet and she warned me to stop if that was the case. I denied it and that matter ended then. I actually stopped till the twins started throwing themselves at me again. Their mother doesn’t give them money so they were always coming to me. I became very careful because I knew that they could get pregnant. I started ejaculating on the floor because they are too young to get pregnant. I used to give them one drink to clear their system.”

On how he managed to commit such evil acted undetected for a whole year, Chinedu said that the twins were taking turns to watch out for any person that might catch them while at it. “For the period, she did not catch us because the twins were working together. It is only in the shop that I can have sex with them, so what we normally do is that one person will be watching when we are doing it. As soon as I am done, they will switch. They will share the N200 I give. During this pandemic, I normally do it early in the morning when their mother had gone to Oyingbo market or later in the evening when customers no longer come. Then my madam must have gone home to prepare food for her husband. She will leave the twins with me to help me clean up, it is then that I will take advantage and have sex with both of them.”

On how he was finally caught, Chinedu said that because of the lockdown he could rarely get the opportunity to touch the twins as their mother or a relative was always around.

“Since the pandemic started, I rarely have opportunity to do anything. So when madam decided to go to the Ijesha market with one of the twins and left me with the other one and his son, I asked his son who is about seven years to watch outside the shop that we were busy inside. We quickly did it but unfortunately madam came back when we were about to finish. It was the boy that told her that his sister and I were playing inside. So the other twin who knew what we were doing rushed in and started shouting that she wants her own money. The twin with me refused and the noise attracted my madam’s attention.

“She started beating the twins to tell her what the argument was about and they told her. I begged my madam to forgive me but she raised alarm and people gathered. This was how they called the police.”

Begging for mercy, Chinedu promised to stay away from the twins if set free. “I am very sorry. I was told that my madam has agreed to forgive me but the policemen that arrested me are insisting that they will charge me to court.

After spending days in police cell, I now understand that what I did is bad. I will not allow anyone to defile my daughter. I don’t want to marry them because they are small but in the next seven years, they will be 18, that means that I can select one and marry. I cannot wait that long, as soon as I am released I will go and find a wife,” he promised.