Suffering from cerebral palsy, the little girl whose name has yet to be ascertained could neither talk nor walk. 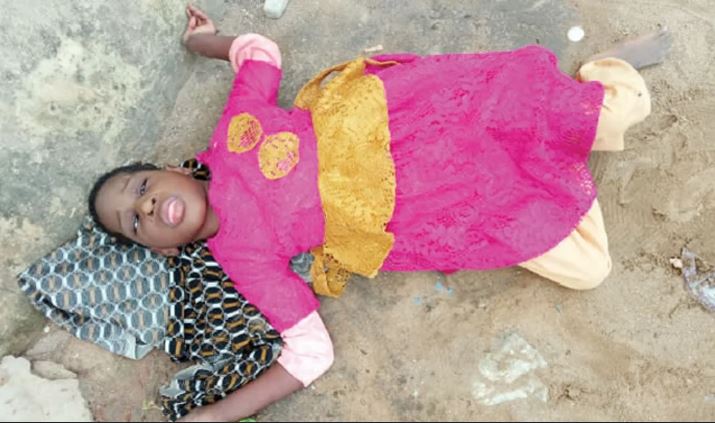 According to a report by Sunday PUNCH, the odds are stacked against her in finding shelter after she was reportedly abandoned in front of a shop on Tajudeen Bello Street, Giwa Oke-Aro Road, Ogun State, by her parents.

Suffering from cerebral palsy, the little girl whose name has yet to be ascertained could neither talk nor walk.

She was also rejected by orphanages she was taken to and currently lies helplessly in police custody at the Agbado division which rescued her from the street.

Sunday PUNCH learnt that the girl, said to be about five years old, was abandoned on the street in the early hours of Wednesday, June 24.

It was gathered that residents contacted the Iju Police Station, Lagos, which shares boundary with the community, and policemen came to pick the girl.

They reportedly returned her to the shop on Friday.

The shop owner, Gabriel Folorunsho, told our correspondent that he was shocked when he saw the girl lying in front of his shop on Friday morning.

Folorunsho, a lotto agent, explained that policemen from Agbado Division, Ogun State, later came to pick the child after a distress call.

“The girl should be about five years. We didn’t have any traces of who abandoned her but we suspect it would be her parents,” he added.

A police source disclosed to Sunday PUNCH that the girl was taken to orphanages at Ijoko and Lambe in Ogun State as well as another one in Ishaga, Lagos, but was rejected.

The source said, “A shop owner reported at the Agbado Police Station that on June 24, a girl with cerebral palsy was abandoned in front of his shop. We learnt that policemen from Lagos initially came to pick her because the location is a border community.

“When he got to the shop two days after, the girl had been returned to her shop. The case was reported and a team went to the area to recover her. She was taken to three different orphanages. Two of them are in Ogun while the other one is in Lagos. They all rejected her.

“They said they cannot accept her because she could not talk or walk. We contacted another orphanage and they promised to come on Monday. The girl is still at the Agbado Police Station.”

A resident, Faith Ademola, urged the government and civil society organisations to assist the little girl.

The Police Public Relations Officer in Ogun State, DSP Abimbola Oyeyemi, confirmed the case, adding that the police were still expecting an orphanage that would accommodate the girl.

He added, “The girl is physically challenged. She is also living with cerebral palsy. We took her to orphanages but they rejected her.”