Malami and Ibrahim Magu, at different times gave separate authorisations for the sale of seized assets. 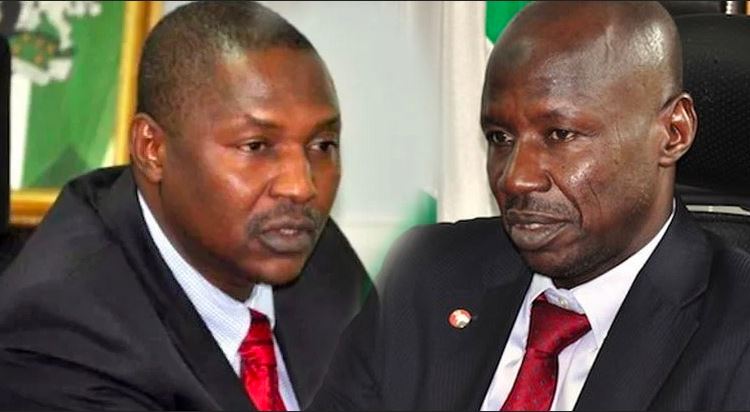 Fresh facts have emerged on the alleged sale of forfeited assets by the office of the Attorney General of the Federation and the Economic and Financial Crimes Commission which pitted the two government institutions against each other.

Investigations by one of our correspondents revealed that the Attorney General of the Federation and Minister of Justice, Abubakar Malami (SAN), and the suspended EFCC Acting Chairman, Ibrahim Magu, at different times gave separate authorisations for the sale of seized assets.

Rather than harmonise the disposal of assets forfeited by alleged looters and other individuals arraigned on charges of financial and cyber crimes, findings indicated that their respective offices had separately invited auctioneers to bid for the sale of luxury homes, cars, trucks, sea vessels, crude oil and other valuables running into billions of naira.

The Ministry of Justice and the EFCC had placed several auction notices in the Federal Tenders Journal and other media inviting the public for auction sales of some seized assets.

In February 2018, for instance, the ministry placed an advertisement inviting auctioneers, marine engineers, valuers and consultants for valuation and disposal of vessels, ships, boats, trucks, vehicles and petroleum products. The notice was placed on a subscription-based online portal, https//:234business.com.

The ministry hinged the move on the decision of the Federal Government  to “clear its territorial waters, ports, dockyards, agency offices/stations and highways of obsolete and unauthorised vessels, barges, boats, ships, trucks, vehicles and the cargo in furtherance of National Security of the Federation and recovery of its assets policy.”

On December 19, 2019, the anti-graft agency auctioned 244 trailers and tankers forfeited to the Federal Government by illegal oil dealers. Eleven auctioneers participated in the bid.

The exercise was inaugurated by the commission secretary, Mr Ola Olukoyede, together with a team of senior officers at the EFCC zonal office in Port Harcourt, Rivers State. The agency issued a press statement on the exercise. A copy of the notice was also published on its website.

In November 2019, Magu also announced that his agency would contract international auction houses to sell the jewellery reportedly worth $40m recovered from ex-petroleum minister, Mrs Diezani Alison-Madueke, together with seizures made from Internet fraudsters, having secured a forfeiture order from the Federal High Court on September 10.

Magu stated this during a conference at the Lagos office of the commission, where he briefed the stakeholders on the crusade against cybercrime and fraudsters.

Sources said the refusal of Magu to involve the AGF in the disposal of the forfeited assets largely informed the rift between them, which led Malami to write a memo to the President, Major General Muhammadu Buhari (retd.), in which he reportedly levelled 22 allegations against the embattled EFCC boss, who is a commissioner of police.

Magu has been held in police custody since Monday and currently undergoing interrogations over what was said to include the unapproved sale of recovered assets.

The embattled EFCC boss was said to have been accosted on Monday by operatives of the Department of State Services in front of the old EFCC headquarters on Fomella Street, Wuse 2, Abuja, around 12pm and whisked to the venue of the panel sitting.

The panel’s investigation is holding behind closed doors in one of the conference rooms in the old Banquet Hall of the Presidential Villa, Abuja.

Meanwhile, documents obtained by Saturday PUNCH on Friday indicated that the AGF last year granted approval to some operators in the oil industry to sell five sea vessels holding crude oil and diesel forfeited to the Federal Government.

The vessels valued at millions of naira and laden with tonnes of crude oil and diesel were seized by security agencies from illegal oil bunkering operators during different operations.

In separate documents, the AGF directed Omoh-Jay Nigeria Ltd. to dispose of the crude oil and diesel in four sea vessels through an open bid.

In another approval, the AGF mandated the firm to sell five vessels despite the fact that the firm and its Managing Director, Mr Jerome Itepu, stood trial at the Delta State High Court, Asaba, for allegedly stealing about 12,000 metric tonnes of crude oil loaded in a vessel, MT Akuada a.k.a. MT Kua, valued at N384m in 2009. The auctioneer was to get three per cent of the sale.

The EFCC had in 2015 arraigned four persons on charges of conspiracy, stealing and receiving stolen goods.

The accused were charged with “conspiracy, contrary to, and punishable under section 516 of the Criminal Code Law, CAP C21, Laws of Delta State 2006.”

According to the anti-graft commission, the accused, sometime in 2009, at Warri, Delta State, within the jurisdiction of the court, allegedly conspired to “commit a felony, to wit: stealing and, thereby, committed an offence.”

It stated, “They were alleged to have committed the offence of stealing, contrary to section 383 of the Criminal Code Law, CAP C21, Laws of Delta State 2006, which is punishable under section 390(4)(c) of the same law.

“According to the particulars of the offence, they allegedly stole about 12,000 metric tonnes of crude oil loaded in a vessel, MT Akuada a.k.a. MT Kua, valued at N384m in 2009, being the property of the Federal Government of Nigeria.”

The third count indicated that the accused also allegedly stole about 4,000 metric tonnes of crude oil, loaded in a vessel, MT Hope, valued at N128m belonging to the Federal Government.

Inegbeneki, the second accused in the charge sheet, was also charged with allegedly receiving stolen goods contrary to, and punishable under section 427 of the Criminal Code Law, CAP C21, Laws of Delta State 2006, “having allegedly received from one Itepu (first accused) and Omoh-Jay (third accused), about 12,000 metric tonnes of crude oil, knowing same to have been stolen.”

However, findings by one of our correspondents indicated that the AGF authorised Omoh-Jay Nigeria Ltd. to auction the forfeited vessels.

In a letter dated April 3, 2019, with reference no. HAGF/ARMU/RMDOVSC/2018/T addressed to the Chief of Naval Staff, Nigerian Navy, Vice Admiral Ibok-Ete Ibas, the AGF said Omoh-Jay Ltd. had been granted approval to conduct an open bid and solicited the cooperation of the navy.

The letter signed by Malami, titled ‘Re: Suit no. FHC/ABS/CS/742/2017 FRN and Anor. vs unknown persons (arrested vessels), was received by the CNS on the day it was signed.

It read, “Please be informed that Omoh-Jay Nigeria Ltd. has been granted approval to conduct an open bid for content only for the following vessels: MT Asteris with crude oil, MV PSV Derby with Automated Gas Oil (diesel), MV Zahra with AGO and MV Long Island with AGO (with leave of court).

“For the purpose of disposal of the products under reference, the Office of the Honourable Attorney-General of the Federation and Minister of Justice requests the Chief of Naval Staff to kindly grant access and necessary support as always for the whole process.”

In the second approval, Malami directed Omoh-Jay Nigeria Ltd. to conduct another open bid for five sea vessels, three of which were laden with crude oil and diesel.

The letter addressed to the MD of Omoh-Jay Ltd, dated September 9, 2019, with reference HAGF/ARMU/NSA/2018/1, was also signed by the Justice Minister. It was titled, ‘Re: Report on suit no. FHC/ABS/CS/742/2017 FRN and Anor. v unknown persons (arrested vessels).

It read in part, “Pursuant to your earlier instruction dated September 12, 2018, on the above subject matter, you are hereby instructed further to conduct an open bid sale for the following vessels: MT Asteris with crude oil, MV PSV Derby with Automated Gas Oil, MV Zahra with AGO, MT Peace and MV Anuket Emerald.”

It further directed the firm to revert with offers to the AGF for final approval before the conclusion of the sale.

“Be informed that the success fees remain three per cent of the total value recovered from the auction. You are, therefore, expected to submit acceptance letter within 72 hours of the receipt of this instruction,” Malami directed.

However, our correspondents could not confirm the current status of the case between the EFCC and Omoh-Jay Nigeria Limited as well as other  co-defendants as of the time of filing this report on Friday.

Reacting on behalf of the AGF, in respect of the approval to Omoh-Jay Ltd, his media aide, Dr Umar Gwandu, simply asked one of our correspondents to make a formal request.

“You are also encouraged to support the enquiry with evidence of criminal conviction. This will assist investigation and decision in considering them for auction or otherwise in view of constitutional presumption of innocence until otherwise established,” he noted.

On the lack of synergy between the AGF and EFCC on assets disposal, Gwandu argued that recovery agencies were unified by existing regulation in assets recovery put in place to regulate their processes and procedure in recovery and disposal of recovered assets.

He stated, “It is out of place to conclude that there is no collaboration. Failure to work on existing regulation that forced collaboration, transparency, accountability and uniformity can, therefore, at best be adjudged as an act of breach.”

Asked specifically why the AGF and Magu were independently authorising auction of assets, he responded, “Submit your enquiry with documents to back your claim.”

The EFCC spokesman, Dele Oyewale, had yet to respond to inquiries regarding sale of assets without recourse to the AGF as of the time of filing this report.

When contacted on the status of the case involving Omoh-Jay Ltd. and other defendants, an EFCC lawyer, A. Latona, declined comment. “Make your inquiry official, please; I don’t respond to questions on the phone,” he said on Friday night.