A court in Abia state has given police a new order on what to do to Church of Satan founder. 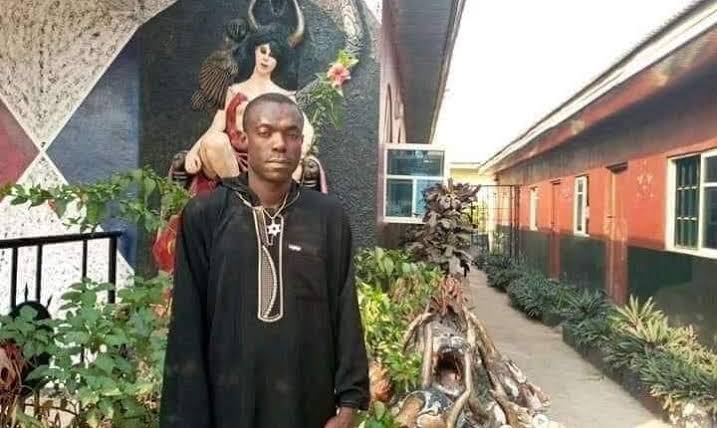 Ifekwe Udo
The Federal High Court, sitting at Umuahia, Abia State, has granted bail to the ‘Church of Satan’ founder, Ifekwe Udo and 17 others.
Recall that he and the others were arrested by the Police over the riot at Ebem Ohafia where government buildings were razed by irate mob.
According to Vanguard, some youths of Ebem community in Ohafia council area had gone on rampage following the killing of a young trader, identified as Ifeanyi Arunsi, by the Police.
When the case came for mention yesterday, Justice E Asiago, in his ruling, said the defendants’ application for bail followed the motion for their release by their counsel. The judge held that since the prosecution team led by S.A Ofoegbu did not oppose the application for bail, the defendants are deemed innocent until proven guilty.
The Judge also held that the offence which the defendants were alleged to have committed are bail-able offences and granted them bail in the sum of N1,000,000 with two sureties each; one of which must be a traditional ruler or recognized chief and a senior civil servant.
The court also held that the sureties must have verifiable address.
Earlier, the prosecution counsel, S.A Ofoegbu, explained that the interest is not to punish the defendants, but to ensure they appear for trial.
In his argument, Counsel to the church of Satan founder, Ibeka Esq, pleaded on the stringent conditions to be applied in granting the 3rd accused bail, stressing that there is lingering acrimony in Ebem Ohafia where the church is located.
He explained that as a result of sentiments over the incident, no traditional ruler or chief would like to stand surety for the Church of Satan Founder, Ifekwe.
However, the Judge ruled that he would not lower the standard because of the defendant and adjourned the matter to October 13, 2020, for trial.
Top Stories