The group which is made up of Christian and Islamic clerics said the spiritual exercise was to strengthen the country’s unity amidst security challenges. 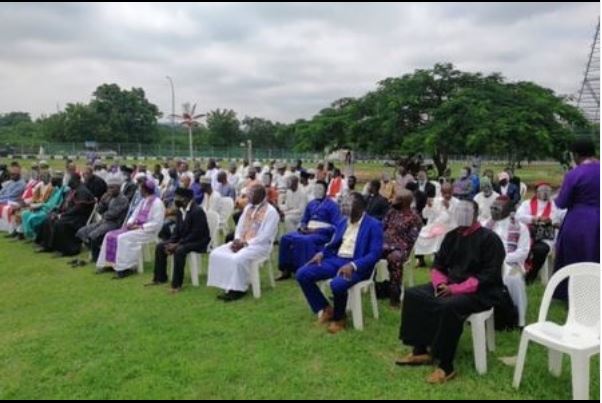 The National Inter-Faith and Religious Organization for Peace (NIFROP), has began a 21-day intercessory prayers for Nigeria

The prayers, which began on Tuesday, had it’s opening ceremony at the Unity Fountain in Abuja.

The group, made up of prominent Christian and Islamic clerics, said the spiritual exercise was to strengthen the country’s unity amidst security challenges as well as for sustained progress under President Muhammadu Buhari.

According to seperate statements issued by co-chairmen, Sheik Ahmad Ibrahim and Bishop Sunday Garuba, NIFROP acknowledged the efforts of the President to deliver dividends of democracy to Nigerians despite the “evil forces” against the nation.

The clergymen also singled out the Armed Forces for praises, who they say have “sacrificed and endured long days and nights just to ensure that Nigerians are safe and free” from terrorists, bandits and other criminal elements.

Hence, Sheikh Ibrahim urged Nigerians to support the military, its leaders as well as President Buhari who is the Commander-in-Chief of the Armed Forces.

“My brothers and sisters, we shall all be praying especially for our troops stationed in the trenches in North-East Nigeria and other parts of North-West Nigeria day and night and engaging the Boko Haram terrorist group in battle".

Bishop Garuba on his part, advised Nigerians to pray against evil forces hovering around the president, his family and cabinet members.

Buttressing Ibrahim’s statement, the Bishop added that the troops on the frontlines need all the support they can get amidst conspirations from some highly placed personalities.

“We shall also pray for unity and peace of Nigeria and for God to guard the country against all her adversaries wherever they are. We shall be calling on God to inflict his wrath on all of those that are against the unit".