According to Lauretta Onochie, the video has nothing to do with instilling discipline in the young boy.

Lauretta Onochie, a controversial aide to President Muhammadu Buhari on social media has described the viral Calm Down video of a boy and his mum a clear case of child abuse.

In a post she made on her social media page, Onochie wrote that times have changed and what the woman did could not be considered as any form of discipline.

She further stated that in a more developeed country like the United Kingdom, the mother would have been charged.

"the calm down video, is a clear case of child abuse. That was not discipline.

Many Nigerian adults today, are suffering from the effects of similar abuse when they were children.

In the UK, the child would be in care, his mother charged

I was distressed by the calm down video. I can’t imagine the trauma that child and other children who watched it, went through.

We must make laws that protect children in our nation

There are better and more effective and humane ways of effecting behavioural changes in children". 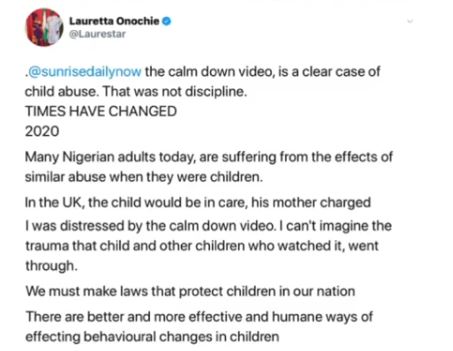 If you recall, the governor of Lagos state, Babajide Sanwo-Olu while addressing residents of the state prior to the Sallah celebration, urged them to emulate the child and calm down in every situation.