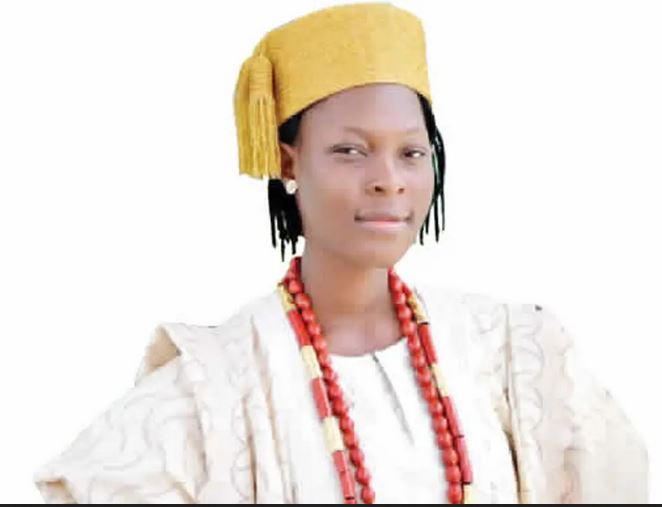 Twenty-four-year-old Moyinoluwa Falowo was installed as Regent of Ibulesoro Kingdom in the Ifedore Local Government Area of Ondo State after the death of her father, Oba Joseph Falowo. She tells OLUFEMI OLANIYI how she has been balancing her Christian faith with traditional beliefs

What were you doing before you were asked to become the regent?

I was working in a biotechnology and molecular-based research laboratory. I completed the mandatory one-year programme with the National Youth Service Corps. I was also preparing for postgraduate studies.

What are your qualifications?

I have a bachelor’s degree in Microbiology from the Ondo State University of Science and Technology.

Since you became regent in 2019, what have been your challenges?

Funding for projects. I have a lot of ideas that are not implemented because of financial constraint.

What is the most interesting thing about being a regent, especially as a female?

My people give me honour and respect because of the throne I sit on. They regard me as the leader of the community and do not consider my age or gender. I’m considered a father, though a female. As a regent, I have been able to know more about my community than I did before ascending the throne. I have personally grown and developed to meet up with my responsibilities and be a well-rounded leader.

Did you know you could be called upon to become a regent after your dad’s passing?

I knew before my father passed on. He told me after his installation, though I didn’t take it seriously because I never thought I’d agree.

How did you feel after your dad passed on and it became clear that what he said would come to pass?

I was not happy about it. I was initially confused about the decision to take. I saw it as a great responsibility that was going to interrupt my personal plans and change my life. I prayed about it, got the peace of God and had the support of friends and family.

As a regent, have you done anything to facilitate development in your town?

I have facilitated development and I am still facilitating development in my community. As an individual who is passionate about community development and problem-solving, I think about new projects to do for my people. I establish partnerships with individuals, non-governmental organisations and government agencies on ideas and projects to better the lives of my people. Through partnerships, we have organised several women and youth empowerment programmes, medical outreach and activated agency banking. We have government presence through the renovation of our public primary and secondary schools. I undergo personal development programmes to facilitate development. For instance, I recently started training in data analytics to help create and analyse community-based data so we can make decisions based on facts and clear statistics as a community.

What is the relationship between the Federal University of Technology, Akure and Ibulesoro?

Ibulesoro is the community that donated the greater percentage of the landmass on which the university is situated. We donated 472 hectares to be precise. We are proud to have contributed that immensely and cheerfully to the existence and growth of the foremost university of technology in West Africa. We have been a responsible and caring host community. We also have workers and students of the university living among us. The relationship between us and the institution is cordial.

However, our expectations as a host community have not been adequately met over the years, in terms of developmental projects, employment opportunities and university policies that should favour us.

I hope that the present university management will look into this, so the relationship we share can be further strengthened and mutually fulfilling for both sides. The university is progressing rapidly and we want to be carried along in this progress. The true meaning of growth is when surrounding communities are positively affected.

What other landmark developments are in your town and what are the challenges the people are facing?

We are one of the fastest growing rural communities in Ondo State because of our proximity to Akure, the state capital. The community is expanding into new areas. We have some new township roads that need construction. Provision of water and extension of electricity to service this development are also needed. There is an alternative major road, Ibule-Aule Road, that, if constructed, will drive more development and assist the rural settlements along that route. These are our major challenges and we are appealing to the government to help construct this road.

What do you think are the factors responsible for the sharp increase in the number of rape cases in the country?

What I think is responsible for such is that we have lost our cultural and moral value system. When values are thrown out, chaos cannot but happen. Other factors responsible for this are bad parenting, not having the fear of God, unsupervised entertainment industry, pornography exposure and addiction, previous sexual abuse, peer pressure, unemployment, provocative dressing and idleness.

Some Nigerian youths have been said to travel abroad to become prostitutes and slaves, facing all manner of dehumanisation. How do you think this can be stopped?

Nigeria has the capacity to be the biggest economy in the world with the kind of human and natural resources that we have. But unfortunately, we are backward. Those that are travelling out to become slaves in other countries are not happy to be in such a state. All these can be solved by creating a suitable environment for youths to thrive in Nigeria. Our government needs to create jobs. More industries are needed. Policies that will favour and not kill small and medium-scale enterprises should be put in place. I would implore fellow young ones to not allow the frustrating state of the country to kill our dreams, morale and resolve to make a responsible living. There is no justification whatsoever to put ourselves through slavery in order to survive in other countries.

Are you married or in a relationship?

I am in a relationship.

How did your fiancé receive the news when you were asked to become a regent?

He wasn’t shocked because I had told him few years earlier that something like that might happen because of the position my father occupied. When the time came, we took the decision jointly with mutual understanding and commitment.

Do you feel constrained by the position?

Not really. I try to utilise all freedom in my position. I do not feel caged. However, I try as much as possible to avoid issues that could bring disgrace to the throne.

What was your initial reaction when elderly persons started kneeling, bowing or prostrating before you?

It was quite awkward at first, but I later adjusted with the understanding that it’s the throne they honour. With that, I accept and reciprocate the respect.

You wrote about the struggle you had when you were asked to become a regent as a Christian. Didn’t your beliefs clash with the beliefs of the community and kingmakers before you were installed?

I actually made my stand known before my installation as the regent, though there have been occasions where our beliefs clashed after my installation. But we try as much as possible to get them resolved without hurting my beliefs.

What are the things considered as taboo for you or that you cannot do as the regent?

I cannot carry anything on my head or leave my head uncovered or kneel before people. I’m also not allowed to birth a child during this period of my regency. But great seeds await my conception after I am done with this assignment. I will get married and give birth to glorious children after my assignment here.

How long do you have to stay as the regent and how long is the process of finding a new king going to take over?

In what kinds of dilemma have you found yourself as regards choosing between your religious beliefs and traditional practices of the town?

I love and appreciate African values and cultures, but I do not practise any African traditional religion because I’m a Christian. I have had challenges with parts of my duties, which are not in line with my faith. It was tough because I had to choose between being misunderstood and attacked by people, and following Jesus. But I chose to stand by my convictions as a Christian. With time, my people have understood and accepted me for whom I am and my stance on some issues. I stand on my decisions and my constitutional right to freedom of religion and association. I also respect the freedom of others to practise their own religions. Patience has also been helpful.

Many people believe there are myths about the traditional stool. How true is this?

Not all are true. I think it boils down to how the traditional stool has been portrayed over the years by the media and movie industry.

How would you describe your experience attending events with other traditional rulers, many of whom are older than you?

It has been wonderful as older traditional rulers welcome me because my father was once part of them. They are kind and also treat me as one of them.

What is your style of dressing as a regent?

My position requires me to dress as a monarch. So, I dress like one.

How has your relationship with your fiancé and family changed since you became the regent of Ibulesoro?

Nothing has changed. We are in this together. My fiancé, family and friends have given me their understanding and support. My relationship with them has been really wonderful. I have not allowed my office to affect my relationship with any of them.