A fan of Erica went on a deeper level after she placed a photo of Vee alongside candles to lay curses on her for gossiping about Erica and Kiddwaya. 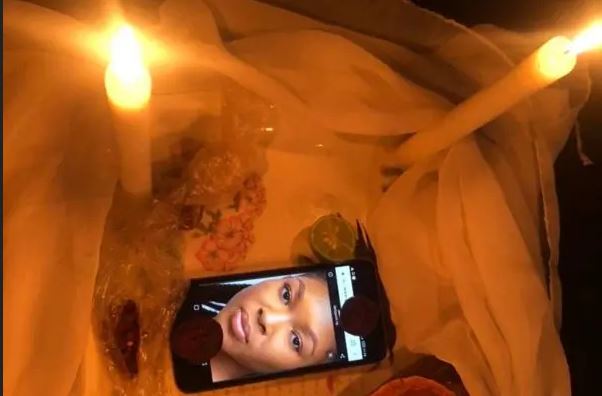 Social media users have expressed shocked, stating that a fan of Erica took things too far as she cursed Vee on Twitter, while going fetish.

The Big Brother Naija show is sure to provide drama, intense fights between housemates, romance and lots more, but many fans have been advised not to take things to personal.

Well, a particular fan identified as, @AmakaNnamanii took to the platform to share a snap that shocked many users.

In the shocking post, a photo of Vee can be seen on smartphone which was placed between lit candles and other fetish materials.

She also wrote that Vee’s relationship would go sour and won’t go scot free for gossiping about Erica and Kiddwaya.

“Nobody can hate on d star gyal and go scord free. Erica is only nice to u Vee. For dis, u will regret gossipin Erica or Kidd. #kiddrica #stupid #veehive #warning we r not afraid to condemn u stupid bitter girl. Ur relationship will sour like dat lime Ewu. #bbnaija #Elite rock”

See reactions by shocked fans below;

"@AkosuaMami: Woozy faceWoozy face has it gotten to this ? this is too much … The whole elites will be dragged for nothing damn!!

@sharon_fabulous: Can y’all stop, I actually thought this was Photoshopped, it’s actually real? What’s this madness for?

@semilicious2: This is not Erica’s stan..I just reported this handle..Erica and vee are product of Grace and nobody can bring them down..team agenda must agend we see u

@Sonwa42706008: This is a disclaimer. We Elites do not support this. As a matter of fact she is not one of us. She did this deliberately to tarnish our image
Peace and Love"