Shock As Coffin With Body Inside Is Dumped At Hospital (Photos)


Eyewitnesses said they saw a few people offloading the casket from a pick-up and putting it on a wooden stand near the entrance of the health facility. 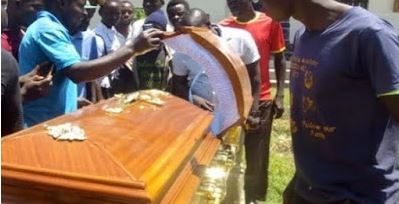 Shock As Coffin With Body Inside Is Dumped At Hospital

Residents of Kisumu East, Kenya were treated to a shocking incident, in which a coffin carrying the body of a middle-aged man was dumped outside Lumumba Sub-County Hospital in unclear circumstances.

Eyewitnesses told K24 Digital that at around 9am, they saw a few people offloading the casket from a pick-up and putting it on a wooden stand near the entrance of the health facility.

“We did not know that the coffin had a body inside. So, when we moved closer and opened it, we were shocked to find that it wasn’t empty; in it, was the body of a man who appears to be in his 40s or 50s,” said one of the eyewitnesses.

“The person who left the coffin behind told us that he was taking the vehicle to the garage, and would, thereafter, come back to take the body,” said another eyewitness identified as Happy, who sells mitumba clothes near Lumumba Hospital.

The residents, who viewed the body, said none of them knew who the deceased was.

A few minutes past 2pm, when police from Kisumu East were almost taking the casket away, two men rushed to the scene and claimed the deceased was their relative.

The duo was allowed to take the coffin, but instructed to first record statements with authorities.

Later Thursday afternoon, a pick-up carrying the coffin was driven to Kanyakwar sides by the two men, who had claimed they were related to the deceased.

Police suspect that the grieving family did not want to bury their loved one earlier than 3pm or 4pm as demanded by the county government regulations on burials during the coronavirus crisis.

“We suspect that they dumped the coffin at the hospital to buy time so that they can bury their loved on Thursday evening. In Kisumu, the county government directed that bodies should be buried almost immediately after arriving at the burial venue,” said a cop, who spoke in confidence.