A Nigerian man has approached a judicial panel of inquiry to lament refusal of police to pay him compensation. 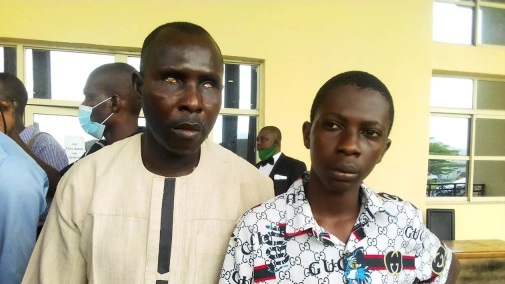 Arigbe cried out before a judicial panel
Simon Arigbe has cried out before the Delta state Judicial Panel of Inquiry over the refusal of the police to honour a court judgement ordering them to pay him N12m compensation.
The ex-taxi driver, who became blind as a result of brutality in the hands of policemen in Ovwian, Udu council area of Delta state lamented and asked the panel to intervene.
Bernard Jamaho, counsel to the victim, told the State Judicial Panel of Inquiry in Warri that the judgement was issued since 2010.
He explained that the victim was molested by a Police team, had his eyes injured in the process and as a result, got blinded.
Jamaho disclosed that rights lawyer, Oghenejabor Ikimi (Esq.) took up the matter and judgment was given in 2010 for N12 million compensation to be paid the victim.
“Some policemen who were on duty at Express Junction by Ovwian, accosted him to ask him for some money, which he could not give to them. He said he had given them before and he could not give them another one.
“That led to an altercation and the altercation led to them beating him up and in the process, they injured his eyes and he got blinded.
“Human rights lawyer, Ikimi, took the matter up, got a judgement in 2010 and the Police had to go to court again to try to set aside the judgement. The court dismissed the application in 2011.
“Since then, every application to the Police Service Commission, to the Police, to the government to make sure that his money, the N12 million awarded against the Police is paid, have proved abortive. Every effort made has not worked. Even through the Attorney General did not work,” the lawyer stated.
He expressed satisfaction with the panel’s decision to make appropriate recommendation to the State Government.
The legal practitioner further called for a different body to enforce judgements by law courts, describing enforcement by bailiffs and the Police as “anomaly”.
“If you get a judgement, the only way you can enforce it is for the bailiff and the Police to go and enforce the judgement for you.
“A situation whereby you have judgement against the Police, who do you now get to enforce the judgement? It is an anomaly that needs to be corrected.
“We have cried, long before now and we are asking again that we want a different body to enforce judgment in this country, not the Police,” he added.
Top Stories