It was gathered that the fuel-laden tanker fell close to a petrol station on Friday, thereby causing panic among road users and residents of the area. 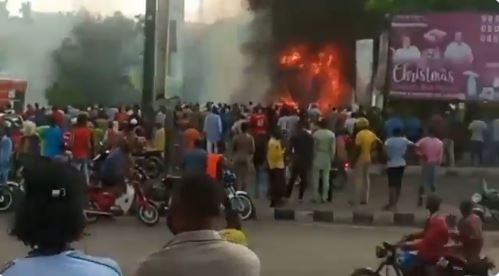 According to a report by The PUNCH, a petrol tanker has exploded at the Iyaganku area of Ibadan, the Oyo State capital, causing some stir in the area.

It was gathered that the fuel-laden tanker fell close to a petrol station on Friday, thereby causing panic among road users and residents of the area.

The fallen tanker was said to have eventually exploded but some okada riders told our correspondent that there were no casualties.

Roads leading to the scene of the explosion were said to have been cordoned off causing gridlock along the Dugbe, Ring Road, and Iyaganku areas in the state capital.

An okada rider, who identified himself as Suraj Adewale, told our correspondent that the tanker fell around 12noon but it eventually caught fire about two hours later.

The Oyo State Sector Commander of the Federal Road Safety Corps, Uche Chukwura, confirmed the incident to our correspondent on the telephone.

The sector commander said, “A tanker fell this afternoon and it eventually caught fire. Our men are there to control the traffic.”