He appealed to Nigerians to rise financially for the treatment of the leg which he feared may be amputated if not treated soon. 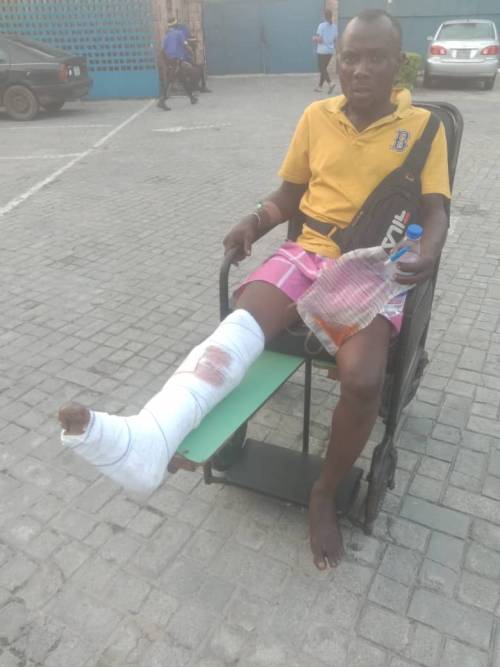 The story has been told of Theophilus Irogbo, a survivor of the shooting at the peaceful #EndSARS protest held at the Lekki Toll Gate in Lagos State, who now needs urgent care.

According to SaharaReporters, the man has cried out to the public for financial assistance over gunshot injuries he sustained on the leg.

Hours before the curfew was scheduled to begin, soldiers had stormed the Lekki toll gate on the evening of October 20 where protesters gathered and started shooting, killing and injuring an unconfirmed number of people.

The incident has received widespread condemnation within and outside Nigeria.

Speaking to SaharaReporters, Irogbo said he could not initially come out to the public after the incident as a result of security threats. He added that he had to come out because he could no longer bear the pain. 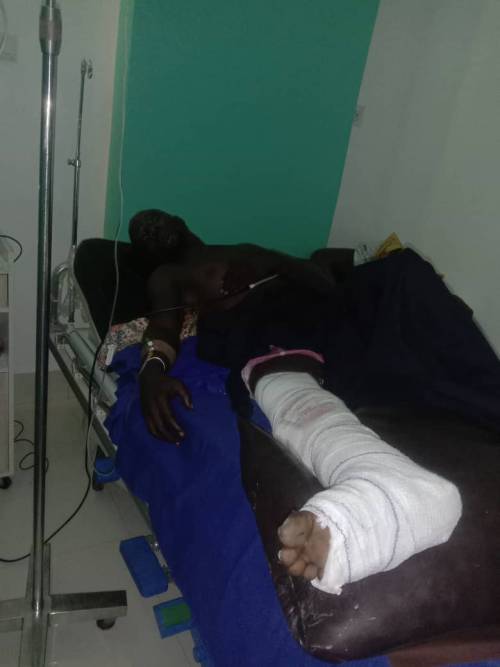 He appealed to Nigerians to rise financially for the treatment of the leg which he feared may be amputated if not treated soon.

He said, "I was shot at Lekki Toll Gate. I'm so sorry I could not grant an interview earlier because of security reasons. The iron they used to hold the leg has been removed; unfortunately, the iron was not meant for the bones to join, it was just for the leg to be straight so that the injuries sustained from the bullet would heal; now they are healed, and the iron has been removed.

"If you look at the leg very well, you will see the foot is falling to one side. I can't lift the leg; I can't sleep. I went to a bone specialist; he charged me N120,000. I don't even know where to start. I am stranded already; I don't know where to start.

"Please I need help, I can't sleep, I can't lift the leg. If I do, if falls in different directions. I can't stay like this; they remove the iron, they didn't put POP. I need help; to feed my family is a problem, not to talk of paying for the bone." 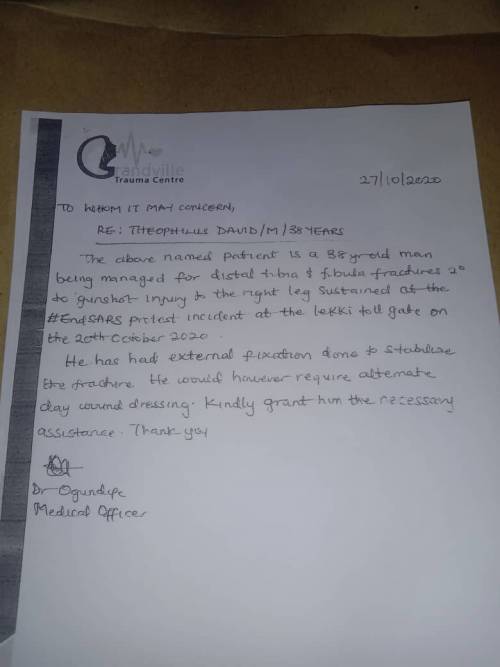 SaharaReporters obtained a medical doctor's report confirming that Irogbo was indeed shot during the Lekki toll gate protest and he needed to be granted immediate assistance.

The report signed by Dr Ogundipe, of the Grandville Trauma Centre, partly reads, "An above-named patient is a 38-year-old man being managed for distal tibia and fibula fractures due to gunshot injury to the right leg sustained at the #EndSARS protest incident at the Lekki tollgate.

"He has had external fixation done to stabilise the fracture. He would, however, require alternate day wound dressing. Kindly grant him all the necessary assistance."